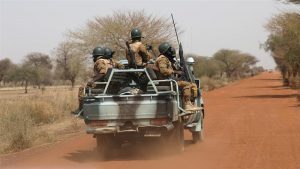 The Defence Headquarters has said that the reported activities of the Islamic State and Al-Qaeda terrorist groups in West Africa is not new, like reported by punchng.com.

It stated that the Nigerian security forces were conscious of their operations and had been working to contain them.

The Coordinator, Defence Media Operations, Maj. Gen. John Enenche, at a briefing in Abuja on Thursday, added that ISIS and Al-Qaeda infiltrated West Africa after Libya and Irag wars in apparent reference to the roles that the United States played in the conflicts.

The Commander, United States Special Operations Command Africa, Maj. Gen. Dagvin Anderson, had on Tuesday cautioned that the Islamic State and Al-Qaida terrorist groups were exploiting the COVID-19 pandemic and gradually taking over the West African region after losing ground in Syria, Iraq and in the Middle East.

Enenche said the Armed Forces was not oblivious of the potency of such infiltration, noting that “it was the Nigerian military who raised the alarm of movement of terrorists from the Middle East to West Africa and is conscious of it.”

The coordinator further noted that the movement of insurgents from Libya was equally revealed by Nigerian security services.

He noted, “Our attention being drawn to the fact that terrorists from other zones are coming here; I think it would be good for us to be keeping records of events as they unfold.

“For me, this is not the first time they are raising such an alarm; the alarm is as old as maybe five or 10 years and the armed forces and the country are conscious of it.

“Have we not captured foreigners among the people that have been terrorising us in this country?

“So, it is just like a call to keep doing what you are doing, so the general public should know that the security agencies are on top of that one.”