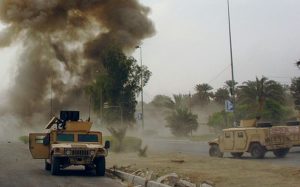 An Islamic State affiliate has claimed responsibility for a series of attacks in Egypt’s Sinai Peninsula that killed nine soldiers and wounded at least 37 others, like reported by abcnews.go.com.

The simultaneous attacks, targeting checkpoints across the town of Sheikh Zweid, prompted Egyptian authorities to postpone the opening of the Rafah crossing with Gaza.

The crossing was due to open Monday for four days. No new date has been set.

Security and hospital officials raised the death toll to nine overnight Monday, while the army said 24 attackers were killed. The officials spoke on condition of anonymity because they weren’t authorized to brief media.

The IS claim was carried by the extremists’ Aamaq media outlet.

Egypt declared a state of emergency and imposed a curfew in northern Sinai after deadly IS attacks in 2015.