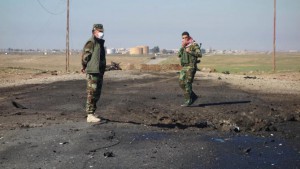 The German Defense Ministry and Kurdish fighters say the Islamic State group may have used chemical weapons in an attack in northern Iraq.

A ministry statement on Thursday says some 60 Kurdish fighters suffered from breathing difficulties as a result of the attack. It says none of the German soldiers training the Kurds in the area 60 kilometers (37 miles) southwest of the city of Irbil were hurt or in danger.

Neither Kurdish nor German officials would specify the type of chemical weapons that may have been used in the attack or provide further details.