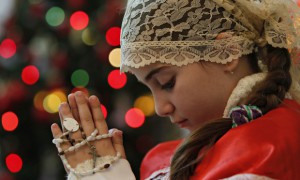 Islamic State militants have abducted dozens of Christian families after seizing a strategically located town in the central Syrian province of Homs, a monitor said on Friday.

The UK-based Syrian Observatory for Human Rights said at least 230 people were kidnapped, including dozens of Christians, some of whom were taken from a church in Qaryatain, the town captured overnight after heavy fighting with the Syrian army.

Qaryatain is near a road linking the ancient city of Palmyra to the Qalamoun mountains, along the border with Lebanon.