You are here: Home / MidEastGulf / Islamic Revolutionary Guard Corps IRGC to use Iran’s presidential election to bolster its power 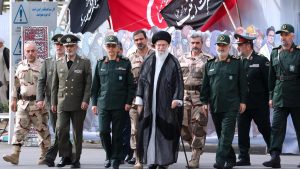 A number of Iranian military leaders, from both the army and the Islamic Revolutionary Guard Corps (IRGC), are among the likely candidates for Iran’s presidential election, which will be held on June 18. Among these candidates are the former IRGC air force commander and former defense minister in the Rouhani government Hossein Dehghan; former IRGC commander and current Secretary of Iran’s Expediency Discernment Council Mohsen Rezaee; and the former head of the IRGC’s Khatam Al-Anbiya Construction Headquarters Brig. Gen. Saeed Mohammed, as well as other politicians with a military background, including Ali Larijani, Parviz Fattah and Mehrdad Bazrpash, like reported by arabnews.com.

It is still a bit early to tell whose names will ultimately appear on the ballot papers. This is because Supreme Leader Ali Khamenei controls the reins of power in Iran and has a tight grip over the upcoming election. Khamenei, after a complicated process to develop consensus and select suitable candidates, has the final say and is interested in preserving the political system’s interests. Therefore, until Iran’s Guardian Council announces its final verdict on the qualified candidates, it is uncertain whether the next Iranian president will be a military man. Prior to taking this decision and determining what the next Iranian president is required to do, Khamenei will have to consider many critical issues, including the country’s domestic stability and its foreign policy, especially regarding the prospects for diplomatic negotiations with global powers led by the US.

However, the number of military figures in the running reflects the political vacuum they are trying to fill and highlights their desire for more control in a bid to assume the second-most important political position in Iran after the supreme leader. It also reflects the attempts by Iran’s military to consolidate its presence in the decision-making institutions. This was evident after the IRGC won several seats in the parliamentary elections of February 2020. Moreover, the ascent of Mohammed Bagher Ghalibaf, a former IRGC commander, to the apex of Iran’s judiciary means the IRGC has extended its influence and reached deep into the country’s political system.

The IRGC’s expanding influence is a direct consequence of several factors. First is its growing political role in domestic and foreign policy decision-making, which has been increasing since its formation. Second is that its economic weight continues to grow, as it controls a large percentage of the Iranian economy. Third is its security and military activities in Iran and beyond the country’s borders — a role that has increased following America’s withdrawal from the nuclear deal, the reimposition of US sanctions on Iran, the outbreak of the coronavirus pandemic, and the country’s unprecedented internal crisis.

The resignation of Saeed Mohammed from his post at Khatam Al-Anbiya Construction Headquarters, one of the IRGC’s most important economic institutions, to run in the presidential election reflects the IRGC’s continued quest for greater economic control.

The IRGC’s deeper involvement in politics is also because it fears that the Iranian political equation may change in a way that opposes its interests. If this happens, clashes might arise between the IRGC and the next Iranian government, should the latter adopt economic and political positions that curb the IRGC’s influence. This scenario is not vastly different to the clash between President Hassan Rouhani and the IRGC, with Rouhani wanting to limit its role and influence, which he sees as an impediment to developing Iran’s economy. This clash of visions will likely continue in the case of a reformist candidate winning the upcoming presidential election and subsequently reaching an agreement with the US. Additionally, opening the channels for foreign trade and investment deals requires Iran to undergo economic reform that would risk the IRGC’s control over the country’s various economic sectors.

The IRGC is also concerned about the potential revival of the 2015 nuclear deal, especially with the possibility of it being amended to include sensitive national security issues such as the country’s ballistic missile program, which it regards as a sovereign issue. This project is led by the Quds Force, the external wing of the IRGC. Thus, the IRGC’s attempts to win the presidential seat may be driven by its desire to shape the potential course of negotiations and to secure the country’s national interests, as the IRGC’s leaders deem appropriate. The IRGC thinks that a reformist president and government would make substantial concessions that might harm both its position and Iran’s interests. In the meantime, the IRGC is taking advantage of the crisis in Iran by enhancing its economic, social and political roles.

Finally, in light of the fact that 81-year-old Khamenei’s position may soon become vacant, the IRGC takes into account the future of Iran’s political system and its role in preserving the revolution, as well as its revolutionary ideology and culture and its role in keeping the internal situation under control. In the post-Khamenei period, an IRGC victory in the presidential election would allow it to play a bigger role, as his death would create a vacuum that would need to be filled by a charismatic leader.

This presidential race seems to be limited mainly to the hard-liner faction, which includes various religious and military figures who are closely aligned with the supreme leader. The moderates, on the other hand, are deliberately excluded and marginalized. Therefore, the electoral triumph of the hard-liners will undoubtedly change the rules of Iran’s game and will further weaken the already fragile balance within its political system. This is because it will endanger Iran’s tattered democracy, which only allows a small amount of political diversity and competition among factions. Last year’s parliamentary elections, which the conservatives won decisively, saw a low turnout. The turnout in the upcoming presidential vote may be even lower if the race is uncompetitive and only limited to clerics and IRGC figures, who are viewed by voters as two sides of the same coin.

It can be said that, in the end, Iran’s political system, in which reformists face exclusion, repression and failure, while its aging religious elite suffers from declining legitimacy, is apparently forced to push its military elites and IRGC figures to the front. This move is intended to control the internal situation and tackle the difficulties experienced abroad.

The IRGC’s rise to power is a direct result of its gains, which have increased over time. Its strengthening hand in the political system will become an inevitable reality sooner or later. This eventuality will not only impact the nature of the religious political system, which has been in place since the revolution, and the nature of the relationship between state and society, but also the nature of Iran’s foreign policy, which is influenced by the revolutionary ideology the IRGC leaders have been protecting for more than four decades.