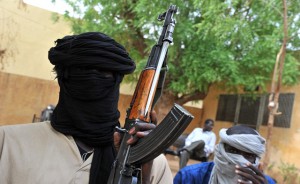 Gunmen identified as Islamic extremists attacked and briefly occupied a village in southern Mali near Ivory Coast on Sunday before security forces drove them out, officials said.

The attack was the second in Mali’s southern half over the weekend by suspected Islamic extremists, and President Ibrahim Boubacar Keita convened a meeting of defense officials in the capital, Bamako, on Sunday to discuss security.

Mamadou Tangara, mayor of the regional capital of Sikasso, said the attackers arrived on motorcycles.

The attackers carried “a black flag of jihadists” and shouted “Allahu Akbar,” or “God is great” in Arabic, a military police official said.

They burned administrative buildings as well as a building being used as a local base for military police, although those officers had left the village before the attack began, the official said.

Casualty information and details on the identity of the assailants in the attack were not immediately available.

In a separate development Sunday, officials in Chad said they have arrested 60 people, including suspects from Cameroon, Nigeria, and Mali, in relation to an attack earlier this month in N’Djamena, the Chadian capital.

A series of suicide bombings initiated that attack on June 15, killings dozens of people and wounding more than 100 others.