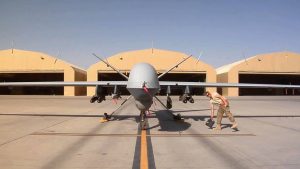 At least two people were killed and another individual was wounded in drone strikes along the Durand Line targeting the suspected militants both inside the Afghanistan and Pakistan territories, it has been reported, according to khaama.com.

The officials in Pakistan’s tribal regions have said a suspected militant was critically wounded after he was targeted in Kurram Agency.

The officials further added that the drones targeted the militant close to a house in Badshah Kot area and the individual wounded in the airstrike has been identified as Khalid and a close relative of an Afghan militant commander.

According to the officials, the US drones also targeted the militants in Khost province of Afghanistan near the Durand Line and as a result two militants were killed.

The latest drone strike in the tribal regions of Pakistan close to the Durand Line has been carried out nearly a month after a similar airstrike targeted the Haqqani network commander in Pakistan.

The airstrike late in December last year was carried out in the vicinity of Mata Sangar area located in Kurram Agency in the tribal regions of Pakistan.

Local officials had confirmed that two people were killed in the airstrike which targeted a vehicle as it was traveling in the area.

According to reports a commander of the notorious Haqqani terrorist network identified as Jamil-ud-Din was killed in the airstrike along with another militant.