You are here: Home / MidEastGulf / Islamic militants open fire at crowd of protesters in Aleppo, casualties reported
A number of protesters in eastern Aleppo demanding to leave the city with their families were killed and dozens were injured on Saturday, as the members of armed groups opened fire on them 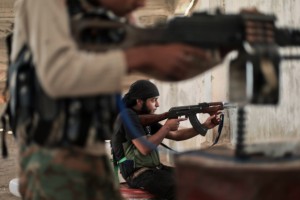 According to the source, hundreds of Eastern Aleppo residents took to the streets to protest the radical policies of the groups that control this part of the Syrian city, but the militants shot at the protesters, killing a number of people, wounding tens more and arresting some others on suspicion of being linked to the government forces.

Over recent months, Aleppo has been a major battleground in Syria, engaging government forces, jihadists, and numerous opposition groups. Militant-held eastern Aleppo is encircled by government forces and the fighting has affected thousands of civilians still trapped in the city. The previous ceasefire failed in September after government forces renewed their offensive in response to militant violations.