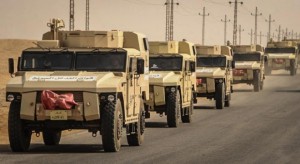 A family of five has been killed by militants in the Sinai, Egyptian officials told the Associated Press on Thursday.

According to the sources, who spoke on condition of anonymity, militants shelled the family home which stood next to a security checkpoint on the Egyptian side of Rafah, a town which straddles the Egypt-Gaza border.

A teenage boy, believed to be a neighbour, was also injured.

Medical and security officials also told AP that one of the victims, a five-year-old girl, is still buried under the rubble.

It was not possible to independently verify the incident, with Egypt’s military restricting access to the Sinai peninsula, large parts of which were declared a military zone in 2013.

Sinai has been plagued by an insurgency which intensified after the 2013 coup against President Mohamed Morsi, Egypt’s first democratically elected president who was from the now banned Muslim Brotherhood.

Militants in the restive peninsula swore allegiance to the Islamic State group earlier this year and have claimed the October downing of a Russian airliner that killed 224 people, although the Egyptian authorities have denied this.