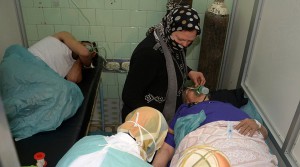 Al-Nusra Front terrorists and some Syrian rebel groups launched an offensive in Aleppo’s south-west on Friday. For three days, terrorists have been attacking Syrian army’s units. Two attacks have been so far repelled; Syrian government forces managed to retake their positions in the 1070 district overnight.

Militants have also been shelling residential areas in western and central parts of Aleppo since Friday. According to medical workers, at least 15 people were killed and 150 wounded.

On Saturday, militants in Aleppo carried out attacks on the Al-Asad military academy and Bustan az-Zakhra district. Heavy fighting continues near the academy with armored vehicles’ detonation and suicide bombers’ attacks as part of the terrorists’ offensive.

According to Syrian military intelligence data, during a few days of the humanitarian pause in Aleppo, militants have redeployed some 8,000 fighters to the city’s south and north. If terrorists gain control over the Al-Asad military academy, the whole western part of Aleppo will be under threat of militants’ fire.