You are here: Home / Mediterranean / Islamic Jihad joins rocket fire at Israel, bringing another round of fighting in Gaza closer 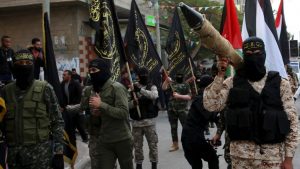 Israel’s announcement Wednesday that the Islamic Jihad was being behind last Friday’s mortar attack on the western Negev reflects something of a change in the narrative about the Gaza Strip, like reported by haaretz.com.

During the recent escalation along its border with Gaza, Israel had been taking pains to present a clear narrative that extremist Salafist organizations have been behind the rocket attacks on Israel; in retaliation, Israeli forces were bombing Hamas positions and command posts (in a manner presented more forcefully to the public in Israel than the reality experienced in Gaza). The narrative went that in an attempt to halt the attacks on Israel, Hamas security forces were arresting Salafists.

But the narrative was based on various assumptions, including that Israel’s deterrence of Hamas has remained strong and that Hamas would prefer to take on small groups in Gaza rather than being dragged into a new war with Israel. Another was that it is better for Israel to put off confrontation. This would give it time to complete the barriers to prevent new attack tunnels along the border while continuing to look for tunnels that had already been dug.

Saying that Islamic Jihad has joined in firing at Israel puts this narrative and the basic assumptions behind it to the test.

Islamic Jihad is the second-largest military organization in the Strip. It has about 10,000 armed forces under its command and a rocket arsenal about half the size of Hamas’.

Islamic Jihad has its own reason to attack Israel: avenging the deaths of 12 Islamic Jihad and Hamas members when Israel destroyed an attack tunnel under the border in late October. Indeed, Islamic Jihad had fired mortar shells at an Israeli outpost on the Gaza border in November. No casualties were reported.

Israel then threatened to strike at senior Islamic Jihad members in Gaza and even in Damascus. Wednesday morning’s announcement appears designed to send a message that if the fire continues, Israel will respond directly against Islamic Jihad. Israeli defense officials don’t rule out that the organization’s members are hiding their group’s involvement in the attacks from Hamas. One way or the other, Hamas seems to have difficulty, or is hesitant, to restrain both Jihadist and Salafi fire.

On Wednesday too three rockets were fired from the Strip to Israel. While the Knesset was engaged in the legislation farce regarding the death penalty for terrorists, which the government has no intention of implementing, the coalition heads’ talk about Israeli deterrence sounded especially hollow.

When Prime Minister Netanyahu is blasted from right and left about displaying weakness in the face of terror, we appear to be nearing another round of fighting in Gaza, after more than three years of relative quiet.

In the background, of course, is the involvement of Iran, which has been funding most of Islamic Jihad’s activity in the Strip and also recently renewed financial support for Hamas’ military wing.

For now it seems that Israel has been making great efforts to prove one of the grievances that have arisen during the current protests in Iran – that the Iranian regime has been supporting guerrilla groups and terrorist organizations across the Middle East while neglecting the distress of average Iranian at home.

On Monday, Israel Defense Forces Chief of Staff Gadi Eisenkot stressed this very point in a speech at the Interdisciplinary Center in Herzliya. On Tuesday, Israel’s trick was already becoming apparent. First came the announcement that Islamic Jihad was responsible for firing Iranian-made mortar shells; then, less than an hour later, came word from the Shin Bet security service that a Palestinian terrorist cell from Hebron, run by an Iranian intelligence agent from South Africa, had been uncovered and that its members had been arrested in November.

The intelligence itself is certainly authentic, but it’s hard to believe that its disclosure now is innocent and divorced from the current context. In fact, not another hour elapsed and Prime Minister Benjamin Netanyahu issued a statement of his own, following the Shin Bet disclosure, accusing Iran of aiding terrorism against Israel.