You are here: Home / Analysis / Islamic immigration as a weapon 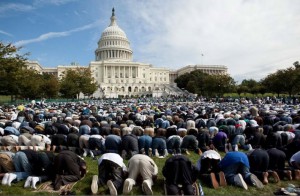 The recent attack in Columbus, Ohio, by a Somali Muslim whose family migrated to Pakistan and then to America once again demonstrates that we are not adequately vetting immigrants. This is not an insignificant issue.

As we have noted before, two-thirds of those convicted on terrorism-related charges since 9/11 were foreign born. In other words, tighter border controls could dramatically reduce the danger our homeland faces from radical Islamic supremacists.

Donald Trump is right to demand “extreme vetting” of new immigrants and refugees coming from areas infested with Islamic extremism. However, there is no vetting adequate enough to sort out which Muslim immigrants may at some future point have their hearts stirred by the call to jihad.

While Christianity is not pacifistic, and the concept of just war is well-accepted within Christian theology, Christ never advocated taking up the sword to spread his message. For Mohammad, holy war and the subjugation of defeated enemies into slavery or dhimmitude was an accepted practice.

To deny this is wrong, and people are dying as a result.

But radical Islamists are well aware that they have other weapons at their disposal than bombs, bullets, cars and butcher knives. One way to defeat the militarily superior West is to use our immigration policies against us.

In a new book, CIA contractor James Mitchell details the interrogations he conducted with 9/11 mastermind Khalid Sheik Mohammed (KSM) and other Al Qaeda operatives. While Mohammed was proud of the 9/11 attacks, he understood that it was “not practical” to defeat America militarily. But he had a plan. Consider this excerpt from Mitchell’s book:

“He said the terror attacks were good, but the ‘practical’ way to defeat America was through immigration and by outbreeding non-Muslims. He said jihadi-minded brothers would immigrate into the United States, taking advantage of the welfare system to support themselves while they spread their jihadi message. They will wrap themselves in America’s rights and laws for protection, ratchet up acceptance of Sharia law, and then, only when they were strong enough, rise up and violently impose Sharia from within. . . ‘Eventually,’ KSM said, ‘America will expose her neck to us for slaughter.’”

Those familiar with the Holy Land Foundation trial will recognize that Khalid Sheik Mohammed was not necessarily articulating a new thought. Look at the problems mass migration have caused in Europe — from the New Year’s rapes to terrorism.

Recently, an Arabic translator working in German refugee camps decided to expose the “pure hatred” she experienced from Muslims toward Christians. Once again, I have to ask what public policy purpose is being served by importing such hatred into our own country?