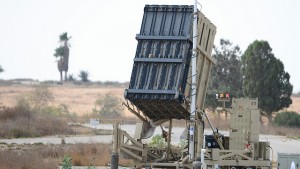 Fearing Iran’s growing arsenal, several Arab countries are attempting to acquire the Israeli-developed missile defense system, in a deal that could be worth hundreds of billions.

The deal’s scope, if it were to take place, is estimated to be tens, perhaps hundreds of billions of dollars.

According to the report, the six countries, members of the Gulf Cooperation Council, are conducting talks through American intermediaries, including Raytheon – which has worked with Israeli manufacturer Rafael and has helped market the Iron Dome system in the US.

The Gulf states have mentioned that they are also interested in long-range interception systems, such as David’s Sling, the Arrow 1, and the Arrow 2. It appears that talks on the matter are at an advanced stage.

According to the GCC, the six countries fear that the recently-signed Iran nuclear deal can lead to the lifting of sanctions, which will bring in an influx of cash that Iran will presumably use to arm itself.

This is in addition to the growing cooperation between Iran and Russia, which is expected to involve military support, as is the case in Syria.

Bahraini Foreign Minister Khalid bin Mohammed al Khalifa said during a visit to London that “The Israelis have their small Iron Dome. We’ll have a much bigger one in the GCC.” He added that “Iran has been trying to undermine and topple governments in our region for years.”

This isn’t the first time such a deal has been discussed. A few years ago, the Gulf countries attempted to purchase the system, which led to disagreements between them and Israel. Now, it seems that both sides have found a common foe in Iran.

A senior Gulf government source was quoted as saying that “If Netanyahu were not making less of a mess of things and was more like Anwar Sadat (who signed a peace deal for Egypt with Israel), then we would be happy to buy the missiles straight from Israel,” discussing the six countries’ insistence on having American mediators involved.

The Gulf states are in the midst of a bloody conflict with Houthi rebels in Yemen, which they believe are supported by Iran.

They have expressed concerns regarding the cooperation between Teheran and Moscow, and were opposed to the nuclear deal, which they consider “naïve”. Just a few months ago, the Gulf states demanded American protection from Iran in the form of advanced military systems, fighter jets, and even military intervention.