You are here: Home / Senza categoria / Islamic groups are battling ISIL propaganda with videos, fatwas, and “meet a Muslim” days 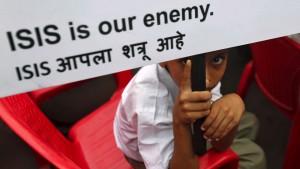 After this month’s terrorist attacks in Paris, Muslims around the world—from ordinary people to religious and national leaders—spoke out against terrorism. In recent months there has also been a growing movement in Islamic communities around the world to counter ISIL’s propaganda by proactively trying to block the group’s recruitment tactics, connect with local communities, and spread the word of peaceful Islam.

Indonesia: Nahdlatul Ulama, an Indonesian Muslim organization that claims more than 50 million members, last week released a film (paywall) that denounces ISIL’s interpretations of the Quran and the Hadith. It’s been translated into English and Arabic for global distribution, including online. Here’s a trailer:

India: More than a thousand influential Muslim bodies and leaders across sects signed a fatwa, or religious declaration, denouncing ISIL as un-Islamic and stating the terrorist group had no relation with Islam.

Canada: In Alberta, Muslims engaged with the public at a “meet and greet” event designed to reduce stereotypes and increase understanding by sharing their culture, traditions, and food with non-Muslim neighbors. Alberta is preparing to welcome thousands of Syrian refugees over the coming months.

Russia: Muslim clergy in the Sverdlovsk region will soon widely distribute a book that points out the differences between extremist movements such as ISIL and real Islam with its centuries-long traditions. It quotes Russian Muslim bodies denouncing ISIL as a terrorist group and calling for Russian Muslims to actively oppose its policies.

United Kingdom: An initiative called Open Your Eyes is using videos and social media to counter ISIL’s online recruiting messages. In videos shot in Iraq and Syria, interviewees (with their faces covered) explain the harsh realities of life under ISIL. Meanwhile videos from the UK feature Muslims speaking out against the terrorist group. “If you join ISIL, you will not have a sense of identity,” explains one young woman. “You will not have the opportunity to have a career. You will not have a future.”