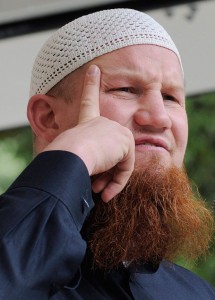 Islamic extremists in Germany are trying to recruit Syrian refugees to their cause, the country’s domestic security service has said.

The warning came as one of Germany’s best known Islamist preachers published a list of suggestions for his followers on how best to approach refugees.

Pierre Vogel, a former boxer and convert to Islam who has been described as “Germany’s most influential Salafist preacher”, a puritan branch of Sunni Islam, called on his followers to seek out new recruits at government refugee shelters.

The preacher told his followers to take gifts and donations with them, and to volunteer to help staff with the influx. If the offer was refused, they should seek out newly arrived refugees at nearby mosques where they would go to pray, he said.

Mr Vogel has publicly denounced violence and terrorism as contrary to Islam, and denies any links to jihadist groups such as Islamic State in Iraq and the Levant (Isil).

But in June German police stormed a house where the preacher had been living until recently and arrested a suspected jihadist who was hiding inside. There are also claims Mr Vogel may have met with another alleged jihadist now on trial in Germany shortly before he travelled to Syria to join Isil.

The preacher’s public speeches have repeatedly been banned by the German authorities. In 2011 he tried to hold public funeral prayers for Osama bin Laden.

Germany’s domestic security service fears the extremists may be trying to prevent refugees from integrating into German society.

A spokesman for the Office for the Protection of the Constitution (BFV) told Welt newspaper it was working closely with staff at refugee shelters to make them aware of the issue.

“According to our findings, Salafists have in individual cases tried to establish contact with refugees on the pretext of alleged offers of help,” the spokesman said.

“The staff recognise the behaviour, codes and clothing of the Salafists, and report the incidents.”

Most of the incidents are believed to have centred on North Rhine-Westphalia, Germany’s most populous state.

There had been “clear proselytising” by Islamists warning refugees against Western values in the state, he said.

The Office for the Protection of the Constitution is currently watching 30 mosques and some 1,900 Islamists in the state, according to the authorities