You are here: Home / Africa / Islamic extremists kill at least 5 gendarmes in Niger 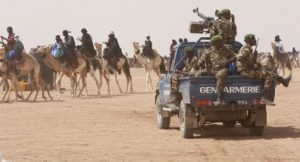 Niger’s defense ministry says at least five gendarmes have been killed in an attack near the country’s western border with Mali, like reported by ap.org.

Two weeks ago Islamic extremists killed at least 15 soldiers along that border in the Tillaberi region.

The attacks follow a February agreement among the presidents of five countries in Africa’s vast Sahel region to set up a joint counterterrorism force.

Mali, Niger, Mauritania, Burkina Faso and Chad have been targeted by numerous extremist groups, including Boko Haram and others linked to al-Qaida.