Egyptian Christians are fleeing the restive Sinai Peninsula, some with just the clothes on their backs, amid a series of killings and an explicit call by Islamic State for its followers to target the minority group 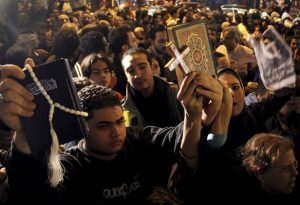 The internal displacement has reached a scale rarely seen in Egypt outside natural disasters. Some 118 Coptic Christian families have fled the northern town of Al Arish—a hotbed of Islamic State activity in Egypt—since Thursday after a Coptic man was shot and killed in front of his family, state media and Christian activists said, like reported by foxnews.com.

No one claimed responsibility but residents fear the attack was carried out by the terror group. Seven Copts have been killed in north Sinai in the past month, all of the attacks unclaimed, according to state media.

The exodus comes in the wake of an Islamic State video, released last week, instructing followers to target Coptic Christians. It featured a tribute to the militant they claim carried out a December suicide bombing at Cairo’s main Coptic cathedral that killed more than 25 worshipers, one of the biggest attacks ever on Egypt’s Christians.

President Abdel Fattah Al Sisi, who came to power in a 2013 military coup promising to restore stability following years of upheaval, has struggled to stop the militants.

Christians, who make up about 10% of the country’s population, initially supported him over the ousted Muslim Brotherhood official Mohammed Morsi, whose group is seen by many Copts as hostile to their church.

On Sunday, the president’s office said Mr. Sisi had instructed the government “to take all the necessary measures to provide accommodation for the citizens” who had fled their homes.

Most had gone to churches but were being provided government housing, mostly in Ismailia province, Egypt’s state newspaper, Al Ahram, quoted the parliamentary affairs minister as saying.

Each family will be provided with roughly $60 in emergency aid, in addition to access to education and health care services, the newspaper said.