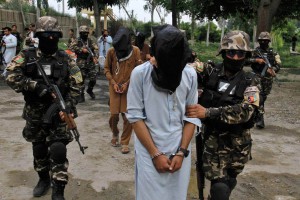 The Foreign Office on Thursday said Pakistan was cooperating with Afghanistan to counter terrorism, including the Daesh threat.

“We think terrorism is our common enemy and a cooperative approach is required to deal with this menace. Pakistan is against terrorism in all its forms and manifestations,” said spokesman Syed Qazi Khalilullah.

At the same time, the spokesman reiterated that there was no footprint of Daesh in Pakistan. “However, we are cognizant of the threat it poses and have alerted our security agencies accordingly. As far as Pakistan is concerned, there are no good or bad terrorists.”

The spokesman said the Afghan ambassador had with his public comments on Wednesday pointed to the complexities of bilateral relations and the way forward to the revival of peace negotiations when he claimed that the Afghan Taliban had joined Daesh and was a new and emerging threat for both Afghanistan and Pakistan, which needed a collective effort to combat. “If Pakistan is to believe that the Taliban have joined Daesh, then how can it encourage them and the Ashraf Ghani government to sit across the table?”

To another query, Qazi Khalilullah said in accordance with the assurance given to Sartaj Aziz, the Afghan authorities had taken measures to enhance the security of Pakistan Embassy personnel and premises.

“The purpose of the MoU signed between the ISI and NDS was to have better coordination between the two security agencies for dealing with security threats faced by the two countries. However, it is for the Afghan government to decide whether it wants to proceed under the MoU or not,” he responded to another query.

The spokesman said Pakistan was ready for talks with India without pre-conditions and there would be no talks if Kashmir was not on the agenda.

“As it was recently reiterated by Adviser to the Prime Minister on National Security and Foreign Affairs Sartaj Aziz, Pakistan is ready for talks without pre-conditions; there will be no talks if Kashmir is not included,” he said.

The spokesman said Pakistan’s position on the Kashmir dispute was very clear.

“It is internationally recognized as a disputed territory. The dispute needs to be resolved in accordance with the UN Security Council resolutions on the issue and aspirations of the people of Kashmir,” he said.

Khalilullah lauded the media for playing an “important” and “appreciable” role in highlighting Pakistan’s internal and external policies.

Commenting on the recent brutal and unjustified killing of two journalists linked with Geo in Karachi and attack on another journalist in Pakhtunkhwa, the spokesman said: “We sympathise with the media fraternity and are saddened at such incidents. We want to offer our condolences to the bereaved families. As you are aware, efforts are being made under the National Action Plan to improve the law and order situation.”