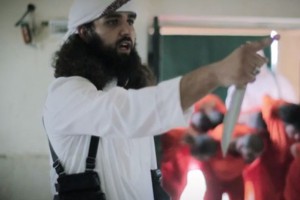 The Islamic State group’s latest mission? Launching a game show to test its members’ grasp of the Quran.

The militant organization recently began passing out pamphlets about the contest, which will be modeled after British music competition “The X-Factor” and evaluate followers’ Quran chops, the Daily Star reported exclusively Tuesday. Whoever can remember the most passages from the holy text will be declared the winner and, as a prize, receive about $470.

But at least one security source was wary of the whole setup.

“I would be extremely reluctant to enter any kind of competition under ISIS,” the anonymous official told the Star. “The winner may be lauded as a religious expert, but I would not like to speculate on what may happen to anyone whose knowledge of the Quran was found to be less than exemplary.”

Interestingly enough, this isn’t the first time “The X-Factor” has been linked to ISIS. The TV show has come up in a number of satirical stories about the militant group. The fighters have also been taking over widely used hashtags — like those about “The X-Factor” — as a way to sneakily promote their activities on social media, according to the Mirror.

Lauren Murray, a one-time contestant on “The X-Factor,” told the Star last year that people on the internet became so wrapped up in the game that they threatened her with ISIS violence. “People are saying ‘I hope ISIS come to your house and shoot you in the head. I hope you die’,” she said at the time.

ISIS has organized events like the game show before. This past summer, the extremists put on an Olympics-style tournament for youth, the Sun reported. Boys played tug-of-war and musical chairs.

The alleged “X-Factor” imitation could be connected to the reported lack of Islam knowledge most ISIS recruits have upon joining the group. Leaked documents reviewed by the Associated Press in August showed that, when people come to ISIS, they’re asked to rate how well they know the religion. About 70 percent said they knew just the essentials. At least two recruits bought books like “Islam for Dummies” online before heading to Syria, the AP reported.

Just how integral the Quran itself is to daily ISIS life is unclear. Didier Francois, a journalist who was held captive by fighters for months, told CNN discussions centered not around religion but politics.

“It was more hammering what they were believing than teaching us about the Quran. Because it has nothing to do with the Quran,” Francois said last year. “We didn’t even have the Quran; they didn’t want even to give us a Quran.”