You are here: Home / West Asia / ISIS would need ‘foreign hand’ to rise in Afghanistan 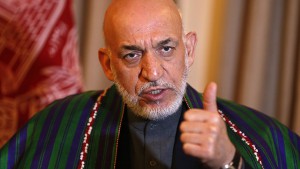 The rise of the Islamic State in Afghanistan would threaten neighboring Russia and China, but it won’t be possible without the jihadist group receiving foreign backing, Hamid Karzai, former Afghan president, told RT’s Worlds Apart show.

Islamic State (IS), called Daesh in Arabic, is “quite alien” to Afghanistan, former President Karzai said when asked how much of a threat he thinks jihadists pose to his country.

Reports earlier this week suggested that between 10 and 12 Taliban fighters had been beheaded by the Islamic State (IS, formerly known as ISIS/ISIL) in the Nangarhar province, at the border with Pakistan. The region is believed to be one of a key targets for jihadists as the organization looks to seize even more territories, adding Afghanistan to taken lands in Iraq and Syria.

But should this happen, “it will only be to go further to Central Asia, to hurt China, to hurt Russia.”

“So, if you hear ever in the coming days, or months, or years that Daesh is on the rise in Afghanistan, and is strong and expanding militarily, it will mean that it is a foreign-backed force intending to destabilize the region, particularly Central Asia, China and Russia,” he added.

Karzai put the blame for the rapid expansion of IS on “foreign interference” in Iraq and Syria saying that it was all “the result of events” there.

Karzai once again criticized the US and its allies for interfering in Afghanistan, saying that the declared war on terror lasted over a decade “without the results that we all expected.”

The 57-year-old politician stressed that during his presidency he was unhappy with many aspects of the US’s behavior in Afghanistan, which was always a “strong point of disagreement” between Kabul and Washington.

While the Americans and “the world” knew “that the sanctuaries, the training grounds, the motivation factors for terrorism lay beyond Afghanistan, and they told us repeatedly that they were in Pakistan,” the US troops still bombed Afghan villages and imprisoned Afghan people, Karzai stressed.

According to Karzai, the problems with the US war on terror in Afghanistan is explained by the fact the Americans didn’t want to side with either the Afghan government forces or the Taliban.

Yet, Karzai did not rule out that peace between Afghanistan and the US is possible. However, for this to happen, Washington should change its strategic thinking in the war on terror and give up on this duality, he added.

At the same time, Karzai, who was Afghan leader from 2004-2014, also supported the idea of talks with the Taliban, who he referred to as “our brothers”, “who are from Afghanistan”.

He stressed that the peace process in the country is also hampered by foreign influence.

“I know for a fact for so many years that those Taliban do want to come back to Afghanistan, but they don’t have the ability collectively to do that because there are other forces in this region, including… the Pakistani military and intelligence that is stopping them from doing that,” he explained.

Karzai remains an important figure in Afghanistan after his resignation and has been trying to use his international connections to help the struggling state.

He visited India for talks with Prime Minister Narendra Modi in May and is expected to arrive in Moscow later this month for a series of meetings, including with President Vladimir Putin.