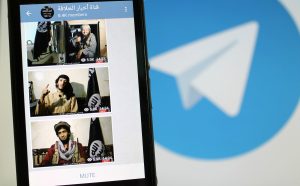 One pro-Isis group called the Electronic Horizon Foundation, or just Horizons, has reportedly shared a lot of material about WikiLeaks’ recent dump through its Telegram channels. Horizons is known to provide tutorials and other such material relating to information security as the extremist group’s tech support unit, Motherboard reported.

A translated version of the list, which was originally posted in Arabic reads: “Wikileaks has published thousands of documents that reveal the secrets of the biggest hack of the CIA, and includes the agency’s ability to penetrate iPhones, Android, Smart TV, Microsoft, and operating systems Mac and Linux.”

The post allegedly warns how the CIA allegedly borrowed codes from public malware samples to develop their exploits. It also points out the consequential dangers of phone hacking, including how spies could likely circumvent the encryption on messaging apps to infiltrate targets’ communications.

“The CIA has the tools to enable them to have access to the entire phones, which of course leads to bypass the encrypted messaging applications,” the post reads.

Other posts by pro-Isis accounts also reportedly include direct links to WikiLeaks’ press release on the Vault 7 documents and details on specific versions of Android exploits.

“For Isis, reducing the attack surface of their apps and devices from intelligence services are a matter of both physical and ideological survival,” said Jade Parker, senior research associate in VNSA Cybersecurity and Terrorist Use of the Internet at research group TAPSTRI.

Parker added: “The increasing attention to matters of cybersecurity in the last several months may reflect a heightened fear and paranoia that the software and technology that facilitated the organisation’s stellar rise will ultimately betray them and their ideological aspirations.”