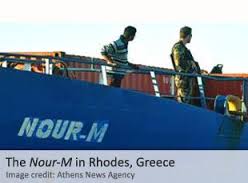 The Greek Coast Guard has seized a vessel Tuesday carrying ammunition and weapons near the southern island of Crete, authorities said, according to the Associated Press. The shipment is believed to be linked to the Islamic State group in Libya, according to local media reports. Authorities have not yet confirmed whether it was connected to the Islamic State group, also known by ISIS or ISIL, and said more information would be released later in the day.

Libya has become a hotbed for fighters with ISIS in recent months. The country has faced severe political turmoil since the 2011 uprising that toppled the government of long-time leader Muammar Ghaddafi. Split between two battling factions, Libya has become easy prey for ISIS.

The news comes as Europe is debating a solution to a growing refugee crisis. More than 300,000 migrants, most of them fleeing war in Syria, have flooded the EU’s borders in recent months.

#Greece Coastal Guard seize vessel off Crete loaded with arms. It is suspected to be linked to #IslamicState in #Libya ~@FlashNews_gr

Pro-government forces have stepped up a campaign in recent weeks meant to oust the extremist militants from their country.

Earlier this week, Jihadists and government forces battled in Benghazi, Libya, where five pro-government fighters were killed in two days of violence, media reports said. At least four soldiers died and 22 were wounded Sunday in clashes with ISIS in the southern district of Hawari.

ISIS fighters planned to use Libya as a gateway to Europe, according to documents believed to be from ISIS and released by the British Quilliam Foundation, an organization meant to combat extremism, the Gatestone Institute reported. By posing as migrants on vessels passing into Europe, fighters in Libya would be able to quietly slip into Europe.

“The Mediterranean is becoming the world’s powder keg,” Toto Martello, a spokesman for the fishermen of the Italian island of Lompedusa, told the Gatestone Institute earlier this year. “We are frightened of our boats being boarded by terrorists,” Martello said.