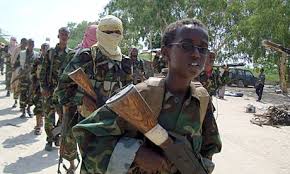 Nigeria’s Boko Haram extremists are urging Somalia’s al-Shabab rebels to join them in pledging allegiance to the leader of the Islamic State group, and thus abandon al-Qaida.

Al-Qaida and Islamic State are rivals for jihadi recruits and the video posted on Twitter on Wednesday tells Shabab fighters that uniting “is of greater benefit to the struggle on the path of Islam” and will “help in defeating the infidels of the world.”

The appeal from an unidentified armed fighter is part of a wider courting of al-Shabab. Similar messages came nearly two weeks ago from militant extremists in Iraq, Sinai, Syria, and Yemen.

Al-Shabab has been losing ground in Somalia to a multinational African force but staged an April attack in neighboring Kenya that killed nearly 150 people at Garissa University.