You are here: Home / Mediterranean / ISIS vows to storm Algeria 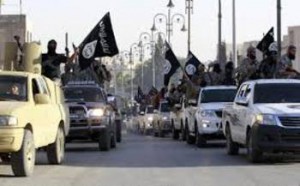 ISIS vowed in a video message to expand its activities in Algeria.

ISIS militants released a statement from the group’s media office in Syria’s Raqqa, saying the war will expand in Algeria, accusing Algerians of apostasy.

The terrorist group called on its militants and supporters in Algeria to fight apostasy.

The ISIS extremists said that a group of people in Skikda state and the desert of Algeria pledged allegiance to the alleged caliph Abu Bakr al-Baghdadi.

“We are glad that our brothers in Skikda and Algerian desert swore allegiance to the ISIS and its caliph. All groups in this country should join our ranks,” an ISIS member said in the video.

“If the war spread in the land of Algeria, we (IS) will definitely head to Andalusia.”