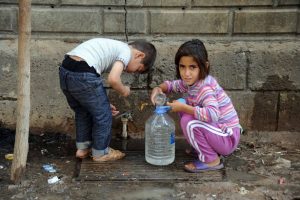 ISIS is using food to try to control the population of west Mosul and entice some to fight with the militants in the city, which is experiencing shortages of basic necessities, including drinking water, like reported by rudaw.net.

“An infant and its sister has died last week in Uruba neighborhood due to lack of food. Now their mother is facing the same fate as she is in a very bad health condition,” a survivor told the Iraqi Observatory for Human Rights, the monitoring body stated in a recent report.

A representative from a hospital told the Observatory that they have hundreds of cases of malnutrition among people who were living under ISIS control, “especially kids, most of whom are dehydrated.”

The Observatory stated that ISIS is using food and the people’s hunger as a weapon, trying to tempt civilians to fight with them and leading some to risk their lives in return for food.

The human rights monitoring body urged the government to establish safe humanitarian corridors for the delivery of food and milk into west Mosul.

Recent rains have complicated the situation, as floods have made it more difficult for supplies to enter from the liberated eastern half, across the Tigris, and into the embattled right bank.

“The flooding has had a big impact. All road traffic has stopped,” Reuters reported on Sunday an official at Hammam al-Alil camp as saying.

The UN has also expressed concern of adequate food and water in west Mosul.

“The battle in western Mosul is very different than in the east – it’s much tougher. There are more trauma injuries, homes are being destroyed, food stocks are dwindling quickly and families are at serious risk because there isn’t enough drinking water,” Lise Grande, the UN’s humanitarian coordinator in Iraq, said in a statement on Monday.

Nearly have a million Mosul civilians have fled their homes since the offensive on the city began last October, the UN announced on Monday. “The sheer volume of civilians still fleeing Mosul city is staggering,” Grande said.

The UN is struggling to cope with the needs of the IDPs who are fleeing western Mosul in larger numbers than they did in the eastern half of the city. They expect hundreds of thousands more may flee over the next weeks.

“We’re doing everything we can but this has been a long battle and the assault on the old city hasn’t started,” Grande said.

She stressed that the most important thing is to protect the safety of civilians, who are facing many dangers, including being shot at and getting caught in artillery fire.

Those who do flee, face execution by ISIS. The Observatory reported that 22 young men were executed on April 1 after they tried to run away from ISIS-controlled areas.

Earlier this month, the Kurdistan Region Security Council announced that ISIS had “massacred” 140 civilians who were fleeing to areas under control of Iraqi forces. Some of the bodies were hung on electrical poles.

Nineveh Police Commander Wathiq Hamdani told the Observatory that a Qayyara hospital recently received the bodies of 22 women and children killed by ISIS when they tried to flee.

Protecting civilians in the densely populated old city has been a challenge for the Iraqi and coalition forces.

“Iraqi forces are reportedly planning a slow and careful advance in order to avoid destruction in this densely populated part of the city, characterized by a warren of narrow alleyways and ancient houses which pose considerable challenges for military operations,” UNHCR wrote in an April update.