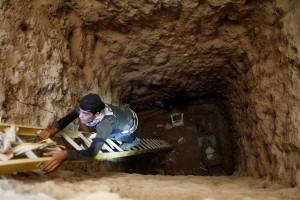 The Mosul operation, which was launched on October 17, seems to be dragging on with the Iraqi forces and allies finding it very difficult to reach the center of the city due to several desperate, yet somehow effective, measures carried out by the so-called Islamic State (IS).

With the Iraqi forces soldiering on to free the city, troops are met with a different kind of resistance that came in the forms of dummy tanks, mannequins with beards, hidden tunnels, and many other forms of devious tactics that usually deterred the army’s path to victory.

Speaking to KUNA, Sabah Al-Nu’man, from the Iraqi counterterrorism unit, said that IS leadership took several decisions to stall the movement of the Iraqi army, using whatever necessary to sabotage the Mosul mission.

It would very be frustrating for the army to eliminate a target successfully only to find out they have destroyed a wooden tank or took out a mannequin with a beard, said Al-Nu’man, adding that IS also used more dangerous tactics such as human shields and hidden snipers to obstruct the army’s advance.

Providing more context on the horrific acts of IS, head of a local clan in Mosul, Nazhan Al-Lahibi said that IS fighters would resort to launching their attacks from the dwellings of innocent civilians which then became targets for the army.

He added that the fates of many families in the Mosul region remain unclear due to the ongoing military operation.

He noted that IS would also use the local populace to fight on its behalf or build a network of tunnels to enable terrorists to flee the scene unscathed.

Al-Lahibi said that IS days in Mosul seems to be numbered; however, he warned that the operation should conclude soon or else the destruction will be hard to reverse especially with the terrorists igniting oil wells while retreating.