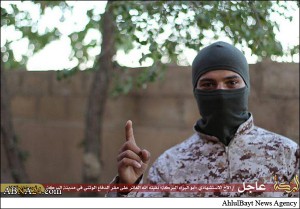 At least one person has been killed and 11 others wounded in a bomb attack that targeted Syrian Kurds in the country’s northern province of Hasakah.

The casualties came after a bomber blew himself up in an office belonging to Kurdish fighters near Hadaya Hotel in the al-Qamishli district on Sunday, according to Syrian state media and the so-called Syrian Observatory for Human Rights.

Meanwhile, Syria’s official SANA news agency reported on Sunday that Syrian forces foiled two attempts by the Takfiri ISIL terrorists to infiltrate into the village of Um Jamme from the adjacent Rajem al-Qaser Village in the eastern countryside of the central province of Homs.

The so-called Islamic state insists that one of the two suicide bombers nicknamed Abuqatadah al-Irani is from Iran.

This is for the first time that ISIS terrorist group called one of its suicide bombers as Iranian nation, though the person in the picture covered his face and his real name is not published.

In recent months ISIS suffered heavy defeats in Syria, so they try to fake the realities by using psychological warfare and propaganda aimed to affect the morality of the Syrian troops.

The violence fueled by Takfiri groups has claimed the lives of over 222,000 people in Syria since March 2011, according to reports.