You are here: Home / Senza categoria / ISIS unveils horrifying map from East to West of countries it wants to dominate by 2020 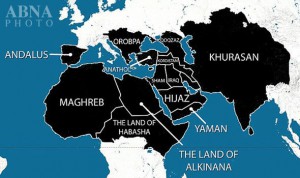 The chilling image highlights areas the brutal terror organisation plans to seize by 2020, including Spain, China and parts of North Africa.

According to the map, ISIS plan to take control of the Middle East, North Africa and parts of Europe, within the next five years, to complete its caliphate.

The caliphate – a state governed by Sharia law which ISIS plan to claim – covers areas from Spain in the west to China in the east.

Andalus is the Arabic name given to the parts of Spain, Portugal and france that were occupied by the Moors between the eighth and the 15th century.

The savage terror organisation has up to 50,000 members and nearly £2billion of cash and assets.

BBC reporter Andrew Hosken – who includes the map of the targeted areas in his new book – said ISIS wants “to take over all of what they see as the Islamic world.

He said: “Once they have their caliphate, they plan to turn against the rest of the world. They envisage the whole world being under their rule.

“They have 60 nations against them, including the Iran, Russia, China so one would think that is pretty unlikely.

“But one would have thought the first steps were unlikely as well.”

Hosken said the brutal organisation sees “us as being under their rule too and having to abide by their ideology”.

He said: “They have already destabilised Iraq and Syria, they have tried to destabilise Saudi Arabia and Libya and recently they almost destroyed Tunisia’s main industry, tourism.

Hosken claims that the longer ISIS remains in Iraq and Syria, the more likely it is they will develop biological and chemical weapons.

He said: “If they had weapons of mass destruction, they would use them.

“There is no question about that.”

The author reveals how in 1996 Abu Musab al-Zarqawi, who founded the depraved terror group which eventually became ISIS, described a seven-step programme that would lead the organisation to victory by 2020.

Hosken said: “We were so close to destroying them back in 2010-11. 80% of their leaders had been captured or killed and they ended up as a little rump.

“We didn’t finish them off and like a cancer they came back.”

David Cameron has already given the green light to a lengthy air strike campaign to suppress the terrorist’s savage advances – but he is facing increasing pressure to send ground forces into Iraq and Syria to tackle the organisation.

But Hosken warns that al-Zarqawi’s seven-stage plan suggests ISIS “would very much like it if we invaded” – claiming it would be the perfect “recruitment drive” for the terror group.

He said: “There is a danger it would be a rallying cry to Muslims around the world to come and a join them. Islamic State want to be seen to be fighting the West.

“They think a lot of Muslims around the world would then see that as Muslims under attack and would join Islamic State.

“The name of their magazine is Dabiq, which is a town in Syria where their Armageddon, the final battle between them and the West, takes place.

“So it could be a bit of an elephant trap.”

It emerged yesterday that the brutal organisation is plotting to blow up the Queen on British soil next weekend – at an event marking the end of the Second World War.

Police and MI5 are said to be desperately racing against the clock to foil the assassination plot by British jihadis, which is being masterminded from Syria by ISIS commanders.

ISIS has gained notoriety for its sickening tactics its fighters have employed as they rampage through Iraq and Syria.

Last week the organisation slaughtered more than 2,000 people in an act condemned as a “crime of genocide”.

The group are said to have carried out the brutal killings “in cold blood” for petty crimes including common theft.

They also executed 19 women hostages who would not have sex with fighters – claiming the women had refused to “participate in the practice of sexual jihad”.

Kurdish Democratic Party spokesman Said Mimousini said: “ISIS executed 19 women in the city of Mosul during the past two days. The penalty decision came on the background of the refusal to participate in the practice of sexual jihad.”