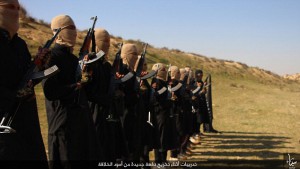 ISIS have unveiled a new jihadi training camp in the Egyptian desert as the group continues to pose a threat in the Sinai peninsula.

The images were taken at the Abu Hajr al-Masri training camp, named after a former Egyptian jihadi and is situated in the remote Sinai desert.

The small group of recruits are shown practicing with weapons and undergoing fitness training.

All of the fighters appear to be wearing the same matching black robes and beige coloured balaclavas to obscure their identity. 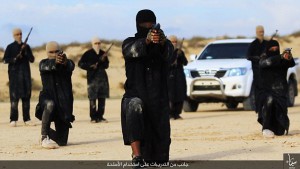 They are pictured handling machine guns and practicing military tactics in different formations.

Some of the fighters are shown tackling an assault course, including jumping through burning metal hoops and crawling along the ground.

Despite concerns over the country’s safety, Egypt still remains one of the most popular tourist destinations for Britons.

900,000 British tourists visit Egypt every year although it continues to be dogged by threats of terror and occasional violence.

224 passengers were killed when a bomb was detonated on a Airbus A321 Russian passenger jet in October 2015. 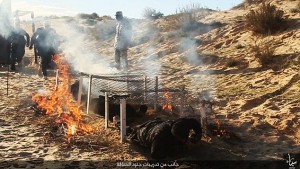 There has been calls for Egypt to increase security following the rise of violence, particularly with the growing threat of an ISIS franchise in Sinai.

‘We need to see what proactive security steps the Egyptians are going to take,’ says Will Geddes, the managing director of International Corporate Protection, which advises businesses and individuals on travel security and counter-terrorism.

‘However, Sharm as a resort is reasonably well protected,’ Mr Geddes said.

Although the Foreign Office warns that there is a ‘high threat from terrorism’, it still does not advise against travel to Red Sea Resorts such as Sharm and Hurghada, as well as the tourist areas along the Nile, such as Luxor, Aswan, Abu Simbel and the Valley of the Kings.