You are here: Home / Senza categoria / ISIS trying to co-opt Palestinian Jihad against Israel as part of its own cause 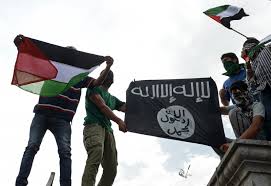 The Islamic State (ISIS/ISIL), through several of its media organs, has expressed support for the deluge of Palestinian terrorist attacks currently plaguing Israel, calling for more.

A new report by the Washington, D.C.-based Middle East Media Research Institute (MEMRI) Jihad and Terrorism Threat Monitor argues the new outbursts of support for Palestinian terrorism is an attempt to commandeer the cause as part of its own.

ISIS considers itself the authority in political and religious matters for all Muslims, with its Caliphate backing Sunnis who fight its enemies.

ISIS regards the Muslim Brotherhood’s movements and affiliates, such as the terrorist group Hamas, as too pragmatic and not radical enough. “In much of the Islamic world, when there are various approaches, the radical one tends to trump those deemed to be weaker,” notes The Jerusalem Post.

According to a poll conducted by the Arab Center for Research and Policy Studies in Doha, Qatar, late last year, nearly one-quarter of Palestinians had positive views of ISIS. However, “the pro-ISIS presence within the Palestinian territories should not be exaggerated. It is primarily limited to small and divided pro-IS groups in Gaza,” Middle East Forum fellow Aymenn Jawad al-Tamimi told The Jerusalem Post.

That being said, ISIS “does not need to have an operational presence on the ground in Israel to be effective, as its propaganda over the Internet can serve as an incitement tool for more attacks,” declares the Post.

ISIS has embarked upon a media campaign that involves the release of a series of videos in support of the ongoing terrorist attacks in Israel and encouraging the Palestinians to carry out more lone wolf assaults, the new report by MEMRI reveals.

As he congratulates the Palestinian attackers on their recent attacks on the Jews, the narrator of a nine-minute video declares:

Oh mujahideen, we call on you to prepare yourselves spiritually and materially to strike terror and fear into the hearts of the Jews. … Know that the soldiers of Islam are fighting here in Iraq, Syria, Khorasan, and West Africa, but their sights are set on Bayt Al-Maqdis [Jerusalem].

The footage was released by ISIS’ information office in Mosul, Iraq’s second largest city. Mosul fell to ISIS in June 2014. Khorasan is an ancient name for a region that covers large parts of Afghanistan, Pakistan, Iran, India, and other surrounding countries.

The MEMRI report noted that “a substantial part of these videos is dedicated to ideological attacks on Hamas and Fatah.”

“Fatah has become an agent of the infidel Jews and Christians, while Hamas is doing the bidding of the Shi’ites [Iranians] and Alawites [the regime of Syrian dictator Bashar al-Assad],” said the report.

The Middle East Forum’s Tamimi told the The Jerusalem Post that ISIS rhetoric in support of the deteriorating security situation on the ground in Israel fueled by the Palestinian attacks is an effective means to make headlines.

It also “fits in with [the] idea of supporting the cause of Muslims everywhere,” said Tamimi who closely monitors Islamist opposition groups in Iraq and Syria.

ISIS has established a foothold in Iraq, Syria, Libya, Egypt, and other regions and is expanding its presence across the globe, with its affiliates pushing for power as far as its Khorasan Province–Afghanistan.

“Arab youth in the Palestinian territories and Israel are influenced by the storm waging in neighboring countries and are willing to join the call to action and seek martyrdom for the sake of their cause,” notes the Post.

“But for now, Islamic State is more of an observer to the violence waging in Israel as local groups such as Hamas have the advantage in claiming the terror as its own because of proximity and its experience waging war against Israel, not only in words,” it adds.