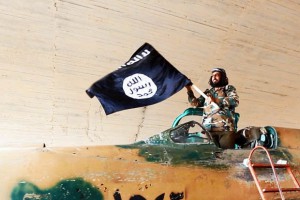 The extremists have two flight simulators and a handful of aircraft at their stronghold in Libya.

They are in range of RAF Akrotiri in Cyprus where Tornados and Typhoons conducting airstrikes on Isis territory in Syria and Iraq are based.

Other targets on the terror network’s radar could be Rome, Italy, and southern France.

The planes do not have the range to reach London.

Isis had been training pilots in Syria using captured Russian-built MiG fighters but they were destroyed in airstrikes.

Jihadis took control of Gardabiya airbase 20km south of the Libyan city of Sirte six months ago seizing at least one fighter jet.

Last year 11 passenger aircraft vanished from the airfield during clashes between militants and the Libyan Army.

Isis captured three more fighter jets in Syria though two are since believed to have been destroyed.

Military experts fear Isis could use its aircraft to launch suicide attacks on the West.

Retired Israeli defence official Colonel Jacques Neriah said: “We are taking about pilots who can take off in a plane and crash themselves into the Vatican, for instance.

“It only takes an hour and a half across the Mediterranean Sea from Libya to Rome.”

The Libyan Air Force has attempted to bomb the airbase near Sirte – where pilot training is believed to take place – several times so far without success.

Islamic State – aka Daesh – has up to 3,000 fighters in Libya and more are set to arrive as Brit jets target the group’s territory in Syria.

A 24-page United Nations report estimated 800 jihadis have already fled Syria for Libya. Most are in Sirte.