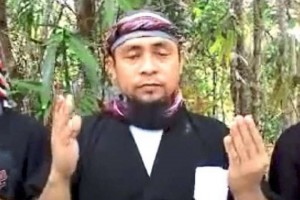 The top commander of the Islamic State in Iraq and Syria (ISIS) in South-east Asia has been gravely wounded in air strikes by security forces hunting him in the southern Philippines, the Philippine military said according to straitstimes.com.

“He will die if he does not get proper medical treatment. He is bedridden. He can’t walk yet. He is being carried around on an improvised stretcher by four of his men,” said Gen Ano, Chief of Staff of the Armed Forces. He cited intelligence provided by soldiers on the ground and civilians providing information.

Defence Secretary Delfin Lorenzana said on Saturday that Hapilon was wounded in air strikes last Wednesday in the mountain town of Butig in Mindanao, 800km south of Manila.

Hapilon, 50, was indicted in Washington for his involvement in the 2001 kidnapping of three Americans from a resort on the western Philippine island of Palawan in 2001.

Hapilon, who has a US$5 million (S$7.2 million) bounty on his head from the United States, has pledged allegiance to ISIS, which has endorsed him as “amir (or prince) for South-east Asia”, according to a 2016 report by Jakarta-based think-tank Institute for Policy Analysis of Conflict. “South-east Asians in Syria have pledged their loyalty to him,” the report said.

A video released in 2014 claimed that four battalions of militants from the Philippines and Malaysia had merged into a single unit under a leadership council now steered by Hapilon.

Hapilon was based in Basilan, but Mr Lorenzana said he moved to Lanao del Sur province, 300km east, in a bid to establish an ISIS presence there.

Basilan and nearby Sulu island, both Abu Sayyaf strongholds, were considered too small and remote for an ISIS “wilayat”, or province.

“(The militants) could easily get cornered there. They are looking for a bigger area… So, (Hapilon) went (to central Mindanao) to see if it is conducive for them to move there and establish what you call the caliphate,” said Mr Lorenzana.

He said Hapilon was taken in by another group that has pledged allegiance to ISIS, the Maute, which has been blamed for a deadly bombing last October in President Rodrigo Duterte’s home city Davao.

Philippine security forces have been battling the Maute group since last November when the militants seized government buildings in Butig. Gen Ano said yesterday that 15 militants had been killed in last week’s air strikes and artillery bombardment, including an Indonesian he identified as having the alias Mohisen.

The militants later beheaded one captive in their stronghold on Basilan island, while another hostage died in the crossfire with soldiers during a rescue operation in 2002. The third American was freed.