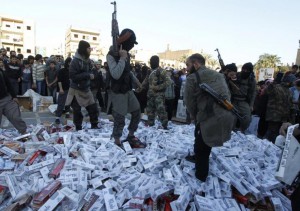 Imperial Tobacco, the fourth largest tobacco company in the world, blamed its falling cigarette sales on the Islamic State group, which has deemed smoking “haram,” or sinful. The British company, which released its half-year results Wednesday, saw overall global tobacco volumes down 5 percent in the last half year. Imperial Tobacco attributed 2 percent of that decline to “the deteriorating political and security situation” in Iraq where the militant group controls about a third of the country, London newspaper the Independent said.

The Islamic State group, also known as ISIS or ISIL, has long imposed a strict ban on acts believed to be sinful, including drinking, cursing and smoking. While cigarettes are allowed under Islam, the terror group’s interpretation of Shariah law declares smoking as a “slow suicide” and thus forbidden in ISIS-controlled areas. The militant group has burned millions of cigarette packs in Iraq and Syria in order to enforce the smoking ban.

Those who violate the smoking ban face a minimum penalty of 40 lashes with a whip. A repeat offender can face severe consequences such as prison time or even execution. The severed head of an ISIS official was reportedly found earlier this year in eastern Syria with a cigarette in its mouth. “This is not permissible, Sheikh,” a note attached to the nearby corpse read in Arabic, the Los Angeles Times reported.

ISIS began imposing radical restrictions in its self-declared caliphate last year after overtaking large areas in eastern Syria’s Deir Elzur province, which is adjacent to another stronghold and the group’s de facto capital of Raqqa. ISIS imposed the full-face veil for women and banned music as well as the sale of cigarettes and hookah pipes, noting the “financial health and damages” from smoking, Al-Monitor said.

“Every smoker should be aware that with every cigarette he smokes in a state of trance and vanity is disobeying God,” the so-called ISIS Preaching Office reportedly said in a statement last year. “Three days following the issuance of the statement, selling tobacco and shisha will be strictly prohibited and those who insist on selling them will bring injustice upon themselves and upon other people. All tobacco quantities will be burned and the seller will be punished according to Sharia.”

The Sunni-led militant group has lost between 5,000 to 6,000 square miles of its territory in Iraq due to a coalition of Shiite militias and the Iraqi military aided by U.S. airstrikes. However, the total amount of ISIS-controlled territory in Syria has remained unchanged, the Pentagon said.