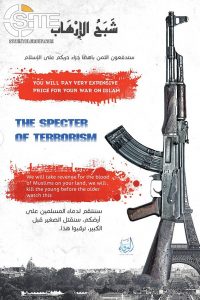 ISIS is threatening terror attacks on France in a chilling propaganda poster released ahead of the anniversary of November 2015 Paris massacres.

The poster shows the Eiffel Tower merged with a rifle, and urges supporters to carry out lone-wolf attacks on the West, like reported by dailymail.co.uk.

It warns that the terror organisation is planning to target children, saying they will ‘kill the young’ in front of their parents.

The poster was published by ISIS-linked Wafa’ Media Foundation, who has been issuing chilling posters of mocked up executions of famous footballers to threaten terror attacks on next year’s World Cup.

It carries messages in both Arabic and English, stating that France ‘will pay very expensive price for your war on Islam’.

‘We will take revenge for the blood of Muslims on your land, we will kill the young before the older watch this.’

Monday marks the two years since the terror attacks on Paris which saw Islamic State attackers killed 130 people in cafes, the national stadium and the Bataclan theater on November 13.

Last month, France’s Foreign Minister Jean-Yves Le Drian that the devastating November 2015 attacks had ‘not gone unpunished’ after ISIS was expelled from its Syrian stronghold Raqqa.

‘I was very moved by this victory because everyone knows that it was from Raqqa that the orders came, the decisions were made, the perpetrators of the attacks in France came,’ Le Drian said on a visit to Madrid.

‘So the crimes of the Bataclan have not gone unpunished,’ he said in reference to the concert venue where IS jihadists massacred 90 concert-goers on November 13, 2015.

In one image, a bloodied and bruised Ronaldo, is seen kneeling with a jihadist holding a knife behind him.

The Portuguese star has a black eye and there is a pile of rubble and broken bones in the background.

The poster has a World Cup 2018 logo on the left hand side with the words: ‘Our words are what you see NOT what you hear. So, just you wait. We are WAITING too…’ at the bottom.

In another poster Messi appears to have been beheaded while Brazilian player Neymar is depicted on his knees crying, as a terrorist stands beside both with a knife in his hands.

The poster reads: ‘You will not enjoy security until we live it in Muslim lands.’