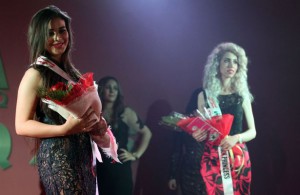 Islamic State monsters have made contact with the newly-crowned Miss Iraq beauty queen, saying that they will kidnap her if she does not join the terror organisation.

But 20-year-old Shaymaa Abdelrahman, who recently won the country’s first Miss Iraq beauty contest since 1972, is insisting that she will not be intimated by ISIS thugs.

She received the call anonymously, with the voice on the phone claiming to be from ISIS.

The voice said that she must join ISIS, else she will be kidnapped and harmed.

However fearless Shaymaa has brushed off the threats from the ISIS cowards.

She said: “I want to prove that the Iraqi woman has her own existence in society and that she has her rights like men.

“I am afraid of nothing, because I am confident that what I am doing is not wrong.

“This event was huge and put a smile on the faces of the Iraqis.”

ISIS control large sections of Iraq, including the city of Mosul.

The contest, which was held in September, was widely criticised in the country.

It was claimed that having a beauty contest was un-Islamic.

Two women who were set to compete in the competition are claimed to have pulled out of the contest after receiving death threats.

The pageant’s artistic director Senan Kamel said: “What we’re hoping to accomplish is to make Iraq’s voice heard, show that it is still alive, that its heart is still beating.

“We deliberately organised the competition according to standards appropriate to Iraqi society to prove to the world that Iraq is a civilised country with a civic soul and a spirit of life.”