Islamic State (ISIS) fanatics have said they will kill hundreds of Britons in Doomsday-style attack that will eclipse the carnage in Paris last year. 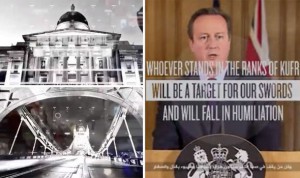 Militants from the terror group, also known as Daesh, identified Britain as its number one terror target in the chilling message.

It said that the UK is due the “lion’s share” of ISIS’s wrath – in revenge for the RAF’s bombing campaign in Iraq and Syria.

The jihadis are thought to have their sights set on central London, after a recent video highlighted a string of potential targets.

Footage released last week includes frames of high-profile attractions which could be the site of an attack.

It marks a change in focus from the Paris massacre, where gunmen shunned national monuments in favour of restaurants, bars and a music venue.

The ISIS message compared the coming strike to scenes of Armageddon in the Koran.

According to The Sunday Times, It said the carnage would “turn children’s hair white” – an image used in an apocalyptic passage of the Islamic holy book.

The whole passage says: “There will be shackles, and fire, and food that chokes, and painful punishments.

“On that day the Earth will convulse and the mountains will become a heap of pouring sand.”

It continues: “How can you defend yourselves, if you don’t believe, from a day that will turn children’s hair to white?

“That day the heavens will shatter. His promise is always fulfilled.”

The 17-minute film features some of the Paris attackers threatening Europe before they set out on their attacks.

One, Abdelhamid Abaaoud, warned that sleeper cells are lying in wait around terror targets.

He said: “By Allah, we will come to you. Rather, we are already in your lands. We will slaughter you inside your homes.”

MI5 and the police are in a constant battle with UK-based terror cells to prevent the next attack.

Their activities are shrouded in secrecy, but the Prime Minister has said at least seven credible attacks were foiled last year.

There are particular fears surrounding the hundreds of ISIS soldiers known to have come to the UK after fighting in Syria.