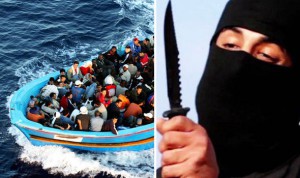 ISIS fanatics have taken advantage of porous borders by travelling from North Africa to Italy on boats packed with refugees, according to terrorism experts.

Now it is feared that the notorious group, which controls much of Iraq and Syria, could target Europe within months.

A counter-terrorism insider said: “Once in Europe they can go through the asylum process or disappear off the radar of the authorities by linking up with even more smuggling networks.”

“This means they can penetrate deeper into Europe and avoid detection from the police and security services.

“Nobody knows just how many there are.”

There are thought to be around a million migrants looking to sneak across the Mediterranean from North Africa, mostly from war-torn Sudan, Somalia and Eritrea.

Last year David Cameron warned that Britain was at threat from the group’s “extreme Islamist regime”.

He said: “The people in that regime, as well as trying to take territory, are also planning to attack us here at home in the United Kingdom.”

Soon after the UK’s terror threat level was raised from ‘substantial’ to ‘severe’ – meaning that an attack is highly likely.

And last month Express.co.uk reported that Britain is at “huge risk of an attack” from jihadists seeking revenge after a US airstrike injured leader Abu Bakr al-Baghdadi.

His wounds were thought to be so severe that he may have been left paralysed for life and unable to lead the barbaric group ever again.