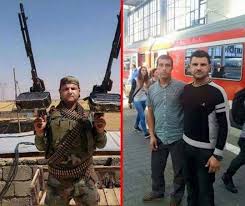 ISIS extremists have been spotted attempting to recruit refugees from asylum camps in Europe, police have said.

Supporters of the Islamic terrorist monsters were spotted chatting to Syrians at an asylum centre in Oslo, Norway.

Authorities have already registered concerns that, given their desperate situation, refugees may be vulnerable to radicalisation as they flee towards European cities.

A spokesman for the Norwegian Police Security Service said: “We have seen signs that extreme Islamists have approached the reception centres and asylum seekers.

“They have been there to get contacts.

“Aside from that, it’s difficult to say what their specific purpose is.

“We are of course worried about recruitment into radical circles.

“Of course we are worried about every single person that may be recruited by extreme Islamists and their cause.”

And Hugo Limkjær, the manager of the asylum centre in Oslo, confirmed that ISIS supporters had been spotted talking to the refugees.

He said: “We had an incident here with an Islamist who has been in Norway for some years.

“His message was that the West had helped to destroy his homeland and they had to stand together within Islam.