You are here: Home / Europe / ISIS terrorists are sneaking into Europe by mingling with boatloads of desperate refugees 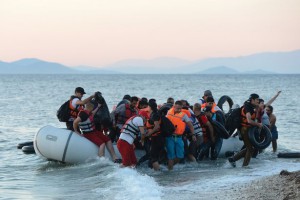 Islamic State terrorists are ­sneaking into Europe by mingling with ­boatloads of ­desperate refugees.

Asylum seekers who risk their lives on ­sea crossings are unwittingly shielding the very evil they are fleeing from.

The IS killers are among the surge of 1,000 migrants a day braving the perilous five-mile trip from the Turkish coast to the Greek ­holiday isle of Lesbos.

An island port officer told the Sunday People: “IS can easily send fighters here to get to mainland Greece and on to wherever they want. It’s a huge and continuing problem.

“What’s happening is incredibly dangerous. The smugglers, who are making lots of money, put too many people on tiny boats. Many have drowned. There will be more.

“The Turkish government needs to stop them coming. We can’t stop them once they arrive. We’re only a small force and there are 1,000 immigrants arriving here every day. The situation is out of control. We need help.”

But for those who make it safely to Lesbos the initial overwhelming feeling is of relief.

The Sunday People saw an inflatable boat packed with 47 Syrians land on a stony Lesbos beach near the capital Mytilene at dawn.

Among those on board who had paid £710 each for the three-hour journey were Wazim, 27, and Rasha, 31, and her kids Laila, aged eight, and Abd, three.

Beaming Rasha, fleeing the Syrian capital Damascus and the IS menace, whooped with joy, punched the air and hugged her ­fellow ­passengers as they arrived. She said: “I was so scared the boat was going to sink. It was totally dark and the waves were rough.

“We’re very wet but we’ve survived. That’s all that matters. I’m so happy my children are safe and we’re all alive. Bless this land.”

She said bombs were raining down in Syria and people lived in constant fear.

Rasha called out: “Viva London!” and said: “I want my children to have a better life and a good education in Europe, maybe in London. I know it has the best schools.”

English teacher Karim, one of 14 Syrians who arrived on a smaller boat minutes ­earlier, shared the same hope. “I’ve dreamt of going to London since I was a little boy. I know it is expensive and hard to get there.

“Do you live in London? Can you take us there from here? If I can’t I’ll go to Germany or maybe Sweden.” Karim has left his parents and six siblings behind in a war-torn village near Damascus but felt he had to risk the dangerous trip and rebuild his life.

Among the passengers were two children aged under five, a pregnant woman and a 16-year-old boy.

Karim said: “The journey was very ­frightening. The women were crying and screaming from fear. We all thought we were about to die. We thought the boat was going to capsize so we threw our bags overboard.”

But this was little worse than the situation he left behind in Syria. He said: “We are bombed every day at all times. IS is ­slaughtering us and even the Syrian Prime Minister is ­hitting us with our own tanks.”

The 16-year-old, Abdul Kader Khalef, said he had worked at the British consulate in Damascus. He said: “The boat was horrible. I had to throw all of my clothes away to save on weight, so all I have now is what I’m ­wearing. It is bad but I hope it will be worth the sacrifice. It is so hard in Syria.”

Taking boats from trouble spots in the Middle East and North Africa for a perceived better life in Europe is a high-risk strategy.

In April alone an estimated 1,308 migrants and refugees were drowned or went missing in the Mediterranean.

According to the United Nations, 40,000 people of Syrian origin arrived in Lesbos and the islands of Chios, Samos, Kos and Leros in the first half of 2015.

Lesbos is a particular magnet. The UN ­estimated that 15,000 migrants ­arrived in June, more than in the whole of 2014, when 12,187 declared themselves refugees. The Greeks are managing to process 200 people a day and send them to the capital Athens, from where they can seek asylum. But that is far short of the 1,000 a day arriving.

Half a million more Syrians are said to be waiting in Turkey to make the same crossing to Greece and escape the fighting that has claimed more than 200,000 lives.

But for locals already reeling under Greece’s economic meltdown it is another blow for tourism, which is vital to Lesbos.

One hotel manager said: “It feels like we are being driven into the sea. More and more refugees arrive each day. It’s bad for business because tourists are put off by it.

“They don’t want to be relaxing on holiday with refugees living homeless around them. It’s depressing. It’s having an increasing effect on the island. People here are not happy.

“We realise they want to escape hardship but why should we pay the price? We have businesses to run.”

Many refugees end up living in squalor in makeshift camps such as Kara Tepe, a former driving instructor centre. They eat bread given by charities and have little ­access to doctors, medicine or clean running water.

Dad-of-three Qurvan Haidari, 27, arrived at Kara Tepe 15 days ago after spending two exhausting months walking from Afghanistan. He said: “The police took our photograph, our names and ­country of origin when we arrived but now nothing. No help.

“There are no doctors and we have been told if we need medicine we have to buy it.

“We’re refugees. We’ve no ­money to buy medicine. It is even worse here than in Afghanistan. There is no food and it is dangerous. I don’t know where to turn.” Qurvan had to leave his children, aged eight, six and four in Afghanistan.

He said: “It breaks my heart. I can’t sleep. At night I think about them and I cry. I wish I was with them now.

“Only the hope of ­seeing them again one day sees me through.”

Brit expat Eric Kempson, a sculptor from Winchester, Hampshire, was arranging a
­clean-up of the camp. He said: “We still have no doctors. We’re doing all we can but we need help from agencies. It is manic.”

Security expert Colonel Richard Kemp, who has worked for the Government’s Joint Intelligence Committee, said: “This is an ­extremely attractive route for the IS to move people from Syria into Europe.

“The more people going to Lesbos, the more attractive it is for IS as it’s much easier to send both individuals and small groups of fighters concealed by large groups of so-called ­refugees. It’s a big risk which needs to be stopped.”

He said Nato should tell Turkey, one of its members, to stop the traffic. Also EU nations should send ships to patrol the waters near the Greek islands to stop the migrants. Australia has done this with Indonesia.

Col Kemp added: “It’s a huge and increasing problem that has to be stopped, not only for anti-terrorist ­purposes but also as Europe simply can’t continue to absorb such huge numbers of illegal immigrants.

“They’re coming from very ­difficult circumstances but the ­solution is not for them to come and overwhelm European countries, in this case Greece.”