You are here: Home / MidEastGulf / ISIS supporters are a headache for Hamas in Gaza 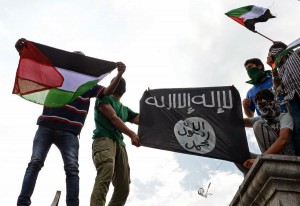 While these Salafi groups are not strong enough to threaten Hamas, they are making life increasingly difficult for the ruling Islamic militant group. Hamas accuses them of being behind a series of mysterious explosions aimed at Hamas security posts, as well as recent rocket launches that have drawn Israeli reprisals and threats of tougher military action. A Hamas crackdown on the Salafists killed a wanted fugitive during an arrest raid last week, appearing to erase any hopes of reconciliation in the near term.

The fugitive, Younis al-Hunnor, had been wanted for months, and his death has prompted angry calls for revenge.

“Hamas are infidels,” says a spray-painted message written on the stairway of al-Hunnor’s apartment building in southern Gaza. “No condolences before revenge,” said another message.

On a recent day, blood stains were still visible outside the apartment, and al-Hunnor’s mother, Basma, fully covered in a black gown and veil, pointed to several bullets holes at the entrance. “They killed him here. They executed him,” she said.

She said her son, the first fatality in Hamas’ month-old crackdown, supported the Islamic State ideology, but that he had never acted against Hamas. “Even if he pays allegiance to the Islamic State, what gives them the right to execute him?” she said.

Salafists include a number of ultraconservative Islamic groups that seek to turn Gaza into an Islamic caliphate. These groups have created a headache for Hamas in recent years, accusing it of being too soft on Israel and of failing to adequately impose religious law.

Hamas has generally tolerated the Salafists since they emerged in Gaza a decade ago, though there have been occasional confrontations. In 2009, Hamas killed a Salafi leader who declared an Islamic emirate in the southern town of Rafah. Since then Hamas has worked quietly to dismantle the groups.

“Now, they are scattered groups, sometimes made up of 10 people who have an ideological problem with Hamas,” said Adnan Abu Amer, an analyst from Gaza. “They could not find a popular incubator to contain them in Gaza.”

But in recent months, Gaza’s Salafists have been emboldened by the rise of the Islamic State group, which seized about a third of Iraq and Syria and declared an Islamic caliphate on the territory it controls. At the same time, Hamas has been weakened by last year’s war while a stifling blockade of Gaza’s borders by Israel and Egypt remains in place.

Analysts believe there are about 1,000 Salafi loyalists — too few to pose a threat to Hamas but enough to cause persistent problems. Their preachers deliver anti-Hamas sermons, and Salafi fighters have claimed responsibility for several recent rocket strikes on Israel. These attacks have caused no casualties, but have strained a 10-month-old cease-fire.

Wary of the rising threat, Hamas has launched a crackdown on the most radical groups, demolishing a makeshift mosque where a preacher had praised the Islamic State group, arresting dozens of activists and religious leaders, searching houses for wanted men and confiscating weapons.

Mushir al-Masri, a local Hamas official, said such steps are a last resort. “We are not interested in the existence of tension.”

But after the crackdown, particularly last week’s killing of al-Hunnor, a 27-year-old father of three, tensions are running high.

Abu Mohammed, a Salafi activist, said the Salafists “love, support and defend the Islamic State” and said anyone who opposes the group is “intentionally or unintentionally taking part in the war against Islam.” He refused to provide his full name, fearing retribution from Hamas.

A visit to al-Hunnor’s home provides a rare glimpse into the insular world of the Salafists. The apartment was filled with books by al-Qaida and Islamic State clerics, and the Islamic State group’s black flag is spray painted on the wall.

Elsewhere, a colored poster explains 17 violations of Islam, ranking them in order of seriousness. The poster urges prayer for less serious crimes, whippings for more serious offenses and shows a picture of a sword — symbolizing the death penalty — for the most serious crimes, such as homosexuality and witchcraft.

Like many Salafis, al-Hunnor began as a member of Hamas’ military wing. His family said he was wounded during fighting against Israel in 2008-2009, and had collected a pension for wounded fighters. Relatives said he left Hamas afterward over “ideological differences.”

Another Salafi, identifying himself only as Abu Ahmed, said the jihadists are relatively weak and disorganized. Unlike Hamas, which has received help from Iran and other regional allies, he said the Salafists receive no weapons or money from abroad.

Wearing a black robe and bushy black beard, Abu Ahmed said the group has no interest in battling Hamas since it is a fellow Islamic movement.

“Our problem with Hamas is that it wants to dominate, it wants to control, it wants to let everybody work according to its own interest. Hamas wants us to fight the Jews when it wants to, and prevents us from fighting when it has an interest,” he said. “This is the main problem. We can’t be tools.”