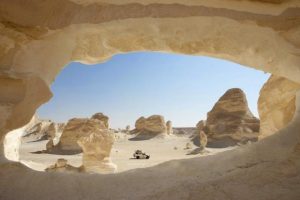 The organizers of Safari tours in North Africa uncovered on Sunday that thousands of four-wheel drive vehicles were out of service due to the presence of ISIS militants at the desert border in Egypt, Tunisia and Libya, like reported by aawsat.com.

The authorities took strict measures to prevent extremists from targeting tourist convoys in the area, particularly that most of those tourists came from Europe.

“The authorities stopped granting permits,” said Imam Fawzi, one of the tour organizers in west Egypt, adding that the problem lies in the resemblance of those desert vehicles to those used by ISIS militants.

A border official asserted that any four-wheel drive vehicle seen at the desert near Libya could be subject to an airstrike as a policy used to confront the transportation of terrorists in the area.

However, the official said that the decision to ban safari tours was only temporary.

According to the organizers of several safari tours, thousands of workers in Egypt, Libya and Tunisia already lost their jobs due to the decision.

Despite their high cost, around 1,000 four-wheel drive vehicles were out of service in the oasis located in west Egypt, while some of these vehicles were instead used to transport vegetables to the farms.

In Tunisia, Zeineddine Abdullah, a tour organizer for French tourists, also said that the roads were not safe anymore.

“We lost our jobs, and we have no money to pay the price of spare parts for our vehicles. We lack the capacities to change our cars’ wheels. If one spare part is broken, it’s not easy for us to change it,” Abdullah said.

Despite everything, “Europeans hope that the safari tours be restored here and they still plan to spend their vacations in the desert.” However, he said, “This is not possible anymore.”