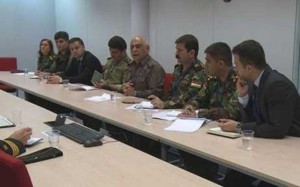 Peshmerga forces delegation in the European Parliament announced on Thursday, that the ISIS still represents a threat to the region, pointing out that the elimination of the organization requires strong international support, explaining that the Peshmerga forces currently rely on military aid provided by the international coalition.

The head of the delegation, Sheikh Jaafar Mustafa, said in a speech followed up by IraqiNews.com, “The Peshmerga forces are in need to diverse weapons and ammunition to be able to eliminate ISIS,” noting that “the latter still poses a threat to the region.”

It is noteworthy that a delegation of the leaders of the Peshmerga forces has arrived, earlier, in Belgium on a formal visit to the European Parliament.