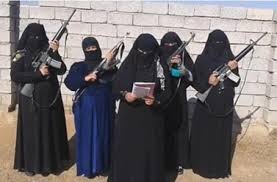 Isis have begun using female fighters and suicide bombers for the first time.

At least seven female militants are in custody and more than three have been killed in the past week in Libya, The Times reports.

One of the fighters attempted to blow herself up.

The attacks mark the jihadist group’s first recorded use of female combatants.

In Syria and Iraq, women have been confined to non-combat roles.

The all-female Al-Khansaa Brigade patrol Raqqa and Mosul, ensuring women are fully covered when in public and are accompanied by a man.

They administer punishments to women who do not adhere to Isis’s strict behaviour and dress codes.

One woman, who was part of the Al-Khansaa Brigade and fled to Turkey, said women who were caught trying to escape would receive 60 lashes, while those who wore heels or did not wear the correct Islamic dress were given “the standard 40 lashes”.