You are here: Home / Mediterranean / ISIS starts building an air force in Libya 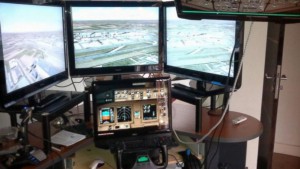 Islamic State (ISIS) terrorists in the port city of Sirte, located in northern Libya, are learning to fly planes using at least one flight simulator according to military officials in the strategically situated North African state.

The sources were quoted by the London-based Arabic Asharq Al-Awsat as saying they aren’t sure how the simulator got into the jihadists’ hands in Sirte, the birthplace of Libya’s former dictator Muammar Gaddafi who was deposed in 2011.

“It’s a modern simulator, which apparently arrived from abroad,” the sources were cited as saying.

ISIS has in the past captured fighter jets in Iraq and Syria, leaving open the potential that terrorist pilots would head from Libya back to those countries in order to launch an ISIS air force of sorts.

Another potential risk is that the terrorists could hijack planes and crash them into sensitive sites, as was done by Al Qaeda terrorists in the infamous September 11, 2001 attacks.

The revelation comes the same Tuesday that UN experts released a report revealing ISIS has between 2,000 and 3,000 terrorists in Libya, and intends to capture more territory in the strategic state.

Concerns are high given that Libya is located on the Mediterranean Sea and provides a strategic point of transit to Europe.

The experts wrote that the ISIS group in Libya is the only known affiliate of the jihadist group abroad that receives direct support and guidance from ISIS headquarters.

There are two reasons for the focus on Libya, firstly because around 800 Libyans who fought for ISIS in Syria and Iraq have now returned to Libya to fight for the group there, and secondly because ISIS is sending emissaries to Libya with direct instructions.

Ever since the 2011 “Arab Spring” in which Gaddafi was killed, oil-rich Libya has been embroiled in chaos and divided between an elected government in the eastern port city of Tobruk, and an Islamist militia government in the capital of Tripoli.

ISIS’s presence in Libya hit headlines in February when it broadcast the brutal mass execution of 21 Coptic Christians, triggering reprisal air raids from Egypt and a mass-exodus of Egyptian workers from the country.

In March, ISIS terrorists published a video in which they vowed that their conquest in Libya will serve as a springboard for a European invasion.