You are here: Home / West Asia / ISIS spreads its roots in the Philippines 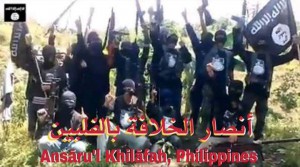 Last month, Australian Secret Intelligence Service Director-General Nick Warner warnedthat ISIS affiliates are ‘in Australia’s backyard’, posing a growing threat to Australia’s national security. During a rare public appearance in Washington DC, he told the audience that the southern Philippines were a particular concern and it looked likely that ISIS is seeking to establish a fully-fledged branch there. His comments highlight that while the group’s losing its stronghold in Iraq and Syria, the ideology of ISIS ‘has spread too far for us to be able to destroy it any time soon’.

ISIS has made significant inroads in garnering support in the southern Philippines this year, adding to their existing presence in Malaysia and Indonesia. In June, the group released an official propaganda video on  showing several ‘battalions’ of the Abu Sayyaf Group (ASG) pledging allegiance to ISIS, joining several other battalions and some of ASG’s leadership—including leader Abu Abdullah—who swore fealty earlier this year. The videocalled for Muslims in the Philippines, Malaysia and Indonesia who were unable to join ISIS in Syria to unite under the leadership of Abu Abdullah, and ‘join the mujahedeen in the Philippines instead’.

According to security experts, the video is important because it shows that ISIS supporters are now being asked to unite under an umbrella group at home and launch attacks in Southeast Asia, rather than travel to the Middle East to fight. It also confirmed that ISIS has established a formal leadership structure in the Philippines, with ASG serving as a focal point for other groups who support ISIS.

The infiltration of ISIS isn’t limited to the Philippines—several militant groups in Indonesia have pledged their allegiance—including those who perpetrated the first deadly attack by ISIS militants in Indonesia in January. In Malaysia, ‘lone wolf’ ISIS sympathisers have been increasingly active on social media, and the group recently launched its first Malay language newspaper, bringing updates from the Middle East. Several hundred (some reports suggest more than 1,000) Southeast Asians have travelled to Syria and Iraq, wherethey’ve formed Katibah Nusantara, a ‘dedicated Southeast Asian military unit’ under ISIS.

Areas in the southern Philippines provide a convenient and hospitable transit point for militants from Southeast Asia, allowing them to regroup, build connections, establish networks and plan operations. As ISIS loses ground in the Middle East, those areas could provide sanctuary for those returning from conflict zones in the Middle East, and those who failed to make it there in the first place. A more organised and better trained militant group, brought together by a formal leadership structure and aided by improved communication technology and low-cost air travel, could pose a significant security threat.

Despite significant counterterrorism and counter-insurgency operations in the area over the last 15 years, the Philippine government has failed to reduce the capabilities of extremist groups. The US has provided US$441 million in assistance to the Philippine military between 2002 and 2013 to fight ASG and other militant groups, which until 2014 also included the deployment of 500 US Special Operations Forces to provide intelligence support and training. While the operation has had some successes, ASG remains a threat to regional security. Malaysia and Indonesia continue to regard the southern Philippines as an ungoverned space and the weak link in their regional security regime—due in part to the lack of professionalism within the Philippine military. That view is also reflected in theAustralian Government’s warning for Australians not to travel to the region, due to the ‘very high threat’ of kidnapping and terrorist attacks.

As a result of this failure, ASG enjoys tacit territorial control over large swathes of the southern Philippines, undertaking small-scale conventional operations against government forces as well as terrorist attacks. The group has received hundreds of thousands of dollars from kidnappings and ransoms, allowing it to grow, recruit new members, purchase weapons and ammunition, and bribe local security forces.

The presence of ISIS in the southern Philippines has repercussions for the wider region, including Australia. At last month’s Australia–ASEAN summit in Laos, Prime Minister Malcolm Turnbull warned that Australia’s region is a growing frontier for radical Islamist terror attacks, and that better regional cooperation and intelligence sharing was needed.

As previous attacks in Indonesia have shown, Australians can be caught up or targeted in terrorist attacks in Southeast Asia. In addition to the immediate threat posed by domestic attacks in Australia inspired by ISIS, there’s a concern that radicalised individuals could return home from the Middle East with the ‘skills’ to carry out more deadly, military-style operations throughout the region.

It’s unclear what impact the Philippines’ new hard-line president, Rodrigo Duterte, will have on the situation in his country’s south. Following an attack in his hometown of Davao in early September which killed 14 people, a state of lawlessness has been declared, with the president vowing to eliminate ASG. In order to do so, he’s pledged to deploy 10,000 troops to the region, upgrade military facilities and use his ‘diplomatic skills’ to persuade ASG to put down arms. In a move that seems at odds with that agenda, he’s asked US Special Forces to leave Mindanao, instead looking to purchase arms from Russia and China, and is considering hiring Gurkhas, a well-known group of Nepalese fighters.

ISIS hasn’t yet demonstrated whether it’s capable of working through ASG to expand its presence in the region, but now isn’t the time to be complacent. There needs to be deeper and more effective diplomatic, military and intelligence collaboration between ASEAN governments, particularly Malaysia, the Philippines and Indonesia, to comprehensively remove ISIS from the southern Philippines.