You are here: Home / Senza categoria / Isis: ‘Simple one-sentence explanation’ of what caused terror group to form posted on Twitter 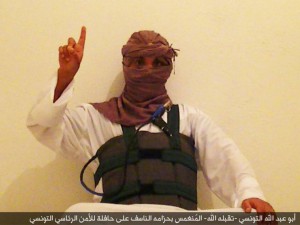 A satirical blogger has offered the up a “simple” explanation of what caused Isis to form and grow into the global terror group it is today.

As Britain prepared to join the dozen countries already bombing militants in Syria, Karl Sharro sought to resolve the competing theories flying around the internet.

“You want the simple one-sentence explanation for what caused Isis?” the London-based writer asked. “Here goes.” 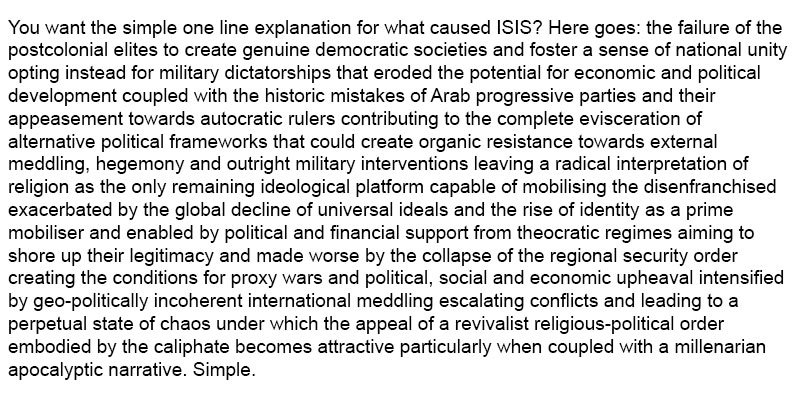 You want the simple one-sentence explanation for what caused ISIS?

The ensuing sentence is 181 words long and covers factors including “the failure of postcolonial elites to create genuine democratic societies”, dictatorships and autocracy, “external meddling” and military interventions, all leaving a “radical interpretation of religion as the only remaining ideological platform capable of mobilising the disenfranchised”.

Mr Sharro described how the draw towards Islamism, which long pre-dates Isis itself, was exacerbated by the “global decline of universal ideals” and the rise of identity politics.

Combined with support for militants from theocratic regimes and the ongoing proxy war between Iran and Saudi Arabia, as well as imploding regional security and “geo-politically incoherent international meddling”, Mr Sharro writes that a “a perpetual state of chaos” has been created in parts of the Middle East “under which the appeal of a revivalist religious-political order embodied by the caliphate becomes attractive”.

The Lebanese blogger, who also directs an architecture firm, said his interpretation had upset some radicalised extremists –  the “punctuation Nazis”.

Some critics called for the inclusion of foreign militants, radicalisation and propaganda, and a greater focus on Islam itself, but most of the 5,100 people who shared his explanation on Twitter responded positively.

It came after Thomas Piketty, the French economist and author, argued that financial inequality was a major driver of terrorism, although his “high inequality” model put the US on similar levels to the Middle East.