You are here: Home / Europe / ISIS signing up Syrian refugees as they land in Germany and children are targets 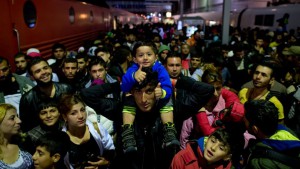 There are now 7,900 Salafi jihadists roaming the streets of Germany, according to Germany’s security agency, with many trying to lure asylum-seekers into their ranks.

The agency – the Office for the Protection of the Constitution – said numbers had risen from 7,500 in June.

Agency head Hans-Georg Maassen, said: “We are very concerned Islamists in Germany are trying, under the cover of humanitarian assistance, to exploit the situation of the refugees for their own ends and to proselytise and recruit among asylum-seekers.”

So far 740 radical Muslims had left Germany to join jihadists in Syria and Iraq, 20 percent of them female. Around one-third have returned to Germany, while about 120 of them have been killed.

He said spies are keeping close watch on jihadists given their “significant radicalisation potential” within the migrant community.

He added: “We are keeping a particularly close eye on unaccompanied minors among the refugees, who could be easy targets for Islamists.

Maassen stressed his office had no evidence that jihadist groups were using the large influx of refugees to infiltrate Germany. He also warned of the “significant potential”

The warnings came on a day when, in Berlin, police raided eight addresses of suspected radicals believed to be recruiting for ISIS.

One raid was conducted at an association linked to a mosque in Berlin’s central Tempelhof district, the spokesman said. Seven homes were also searched.

Security officials stressed they had no evidence of a terror attack being planned in Germany.