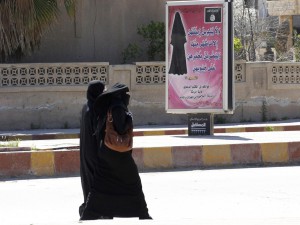 Isis is believed to have ordered the closure of all women’s clinics supervised by male doctors in its Syrian heartlands, in the latest assault on the health and rights of women in the territories controlled by the militant group.

A culture of rape, forced marriages for child brides, the persecution of doctors and the exclusive use of medicines for militants have resulted in a crisis for women’s health under Isis’s brutal regime.

According to activists, Isis has drastically restricted the work of male gynaecologists in accordance with its leaders’ belief that men and women should be kept apart at all costs.

Sources told the Syrian Observatory for Human Rights that all women’s clinics in Raqqa state overseen by men had been shut down. Gynaecologists working in the province’s larger hospitals had their involvement in operations “confined”.

The Observatory, a London-based network of activists, said it had previously reported on the closure of women’s clinics in smaller provinces held by Isis.

“People expressed their resentment over these steps taken by [Isis] regarding health and medical staff in the city, which already suffers from the lack of female medical staff engaged in these tasks,” it said in a statement.

Another activist network, Raqqa Is Being Slaughtered Silently, also reported threats and harassment towards doctors in the city on Wednesday night.

“A lot of doctors have [already] left, especially gynaecologists who were barred from practising their work and [threatened] with death,” said Abu Mohammed, the group’s founder.

Earlier this year, doctors in Isis’s Libyan territories reported a dramatic increase in cases of miscarriages and STDs among young women, as girls are forced into unions with fighters.

One gynaecologist told The Times in May that girls taken in to clinics were often so young they had no real sense of what was happening to them. “We see girls who are bleeding heavily from their genital area. Some of them don’t know what sex is — they come into the clinic playing with their dolls.”

The demand on women’s clinics continues to grow in Isis-held Syria and Iraq, as women are tasked primarily with producing the next generation of fighters.

A “manifesto” for the role of “Women in the Islamic State”, unearthed in February by the Quilliam counter-extremism think-tank, revealed a “sedentary” lifestyle as mothers and homemakers.

“It is considered legitimate,” the document says, “for a girl to be married at the age of nine.”