You are here: Home / Senza categoria / ISIS shows how it brainwashes young kids and turns them into ‘cubs of the caliphate’ 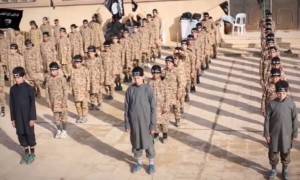 The Islamic State (ISIS) has shown how it is raising an army of young warriors brainwashed and trained to become remorseless killing machines.

In a jihadist propaganda video recently posted and translated by the Middle East Media Research Institute, the ISIS points out that the “cubs of the caliphate,” as what it calls its young warriors, will become the next wave of jihadis who will help “conquer Damascus, Baghdad, Jerusalem, Mecca, Al-Medina, Dabiq, Rome and Andalusia,” The Christian Post reports.

The video, which was reportedly taken at a “sharia institution” in the Syrian town of Deir ez-Zor, shows a class of young boys squatting on the floor as they recite the Quran.

The narrator asks the boys what they want to become when they grow up.

One child answers: “I want to be a martyrdom-seeker for the sake of Allah, thus heeding the words of the Prophet Muhammad: ‘The martyrs that Allah loves most are the ones who fight in the front lines and do not turn their backs until they are killed.'”

The narrator says the “cubs” fight side by side with “their brothers on the front lines.” A video clip of young boys shooting assault rifles is then shown.

“Just as they are humble towards Muslims, they are harsh towards the infidels,” the narrator says. “From a very young age, they are raised on harshness, hatred, and animosity toward the infidels.”

More video clips of the young warriors firing AK-47s and other kinds of assault rifles are then shown.

“The Islamic State is proud to have planted true Islam within these cubs, who will be in the midst of the battles in a few years, Allah willing,” the narrator says. “Even if we are all eradicated and no one survives, these cubs will carry the banner of jihad and will complete the journey. By Allah, with these young men, we will make the infidels forget the whispers of Satan.”

The ISIS is known for using its “cubs” to execute convicted prisoners.

Recently, the terrorist group released a propaganda video showing a British boy and four other “cubs” executing five Kurdish troops by shooting them in the back of the head in the ISIS’ de facto capital of Raqqa in Syria.

On Tuesday, the ISIS released another video showing children watching executioners as they behead a group of men in orange jumpsuits, Iraqi News reports.

At the end of the video, an ISIS executioner is shown giving a handgun to a young blond boy dressed in combat fatigues. The boy is then told to fire into the back of the head of one of the prisoners.