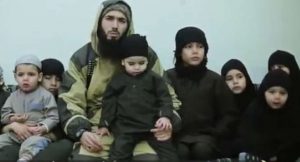 A new ISIS video shows a French jihadist raising his nine small children to follow the terrorist group, the little girls cloaked in black abayas and the young boys dressed in military garb and ISIS caps, like reported by pjmedia.com.

The video released from Raqqa — the ISIS capital in Syria slowly being besieged by tens of thousands of fighters from the multiethnic, multisectarian Syrian Democratic Forces — is titled “The Islamic State: The Trustworthy Religion” and also chides Muslims enjoying Western life.

The Syrian citizen journalist group Raqqa Is Being Slaughtered Silently identified the French ISIS member, who spoke his native tongue in the video, as Abu Yaqoub al-Fransi.

The Frenchman is shown pushing some of the kids on a swing and taking the boys to school, the 14-minute video painting his life as virtuous while slamming the Middle East version of “The Voice” reality show singing competition.

ISIS also mocks the YouTube-popular Arab desert pastime of surfing atop cars balanced on two wheels as an un-Islamic amusement.

ISIS also announced the launch of a new TV network in Raqqa, Al-Bayan, and showed a sample programming lineup. The group already had its Al-Bayan radio station, which is still broadcasting in Raqqa, including in English, but has been seized by Iraqi forces in Mosul. ISIS has long confiscated satellite dishes in occupied areas to try to control the media narrative, and the new video shows the ritual stomping and ax-hacking of broken satellite dish equipment.

Another foreign fighter is shown playing with his young kids in a park before teens are seen being sent off in armored vehicles to conduct suicide bombings. A boy at the end of the video breaks down in tears after describing his allegiance and singing a nasheed.

ISIS, which has operated a longtime “cubs” program to raise young jihadists and has urged procreation among its ranks to raise new jihadists, has increasingly shown children in their recent videos conducting more violent acts at younger ages.

In December, a grisly video produced in Raqqa showed child jihadists hunting down bound “apostates” in a live-fire training exercise.

As of a year ago, about 6,000 Europeans had gone to the Islamic State to join the terror group, with France representing the largest number of European recruits.